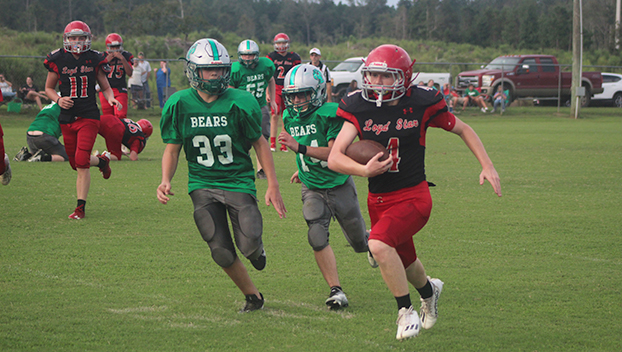 Loyd Star running back and linebacker Carson Cunningham scored two rushing touchdowns for the Hornet's Junior High team in a 38-0 win over West Lincoln. He also made a couple of tackles on defense. (Hunter Cloud | The Daily Leader)

Carson Cunningham opened the scoring with a nine-yard rush in the first quarter and scored again in the second quarter on a three-yard run. Jamarion Terrell had the longest rush of the night in the second half.

He broke a few tackles and found pay dirt on a 70-yard touchdown run to put Loyd Star up 22-0 following a two-point conversion.

“As soon as I saw the hole open, I just ran,” Terrell said. “I didn’t think of anything else but that. I’m grateful to be on the team. I would like to play this sport in college. Personally, I felt like I had made some mistakes in the first half. I scored the touchdown when I believed in myself.”

Cunningham said it felt great to help contribute to the team’s win. He made several tackles on the defensive side of the ball and was a steady ball carrier on offense.

“Our offensive line was excellent. We have a good quarterback. I thought it was a good team win,” Cunningham said. “On defense, If you read the guard, you could get as many tackles as you wanted. Their offensive line couldn’t get to the second level, and that let us make tackles.”

Cunningham expects Bogue Chitto to be the toughest test for the Hornets this season. They have a solid running back. Loyd Star has been undefeated the last four years, and his goal is to keep the streak going.

West Lincoln quarterback Ben Segrest said attitudes and mentality would be his team’s biggest challenge this year. His goal is for the Bears to play better than last season.

“We just have to practice harder and work as a team. We can have a better attitude about the game,” Segrest said. “We want to win more games and get better. I think today we might have had too much confidence. We can’t let our heads get down though.”