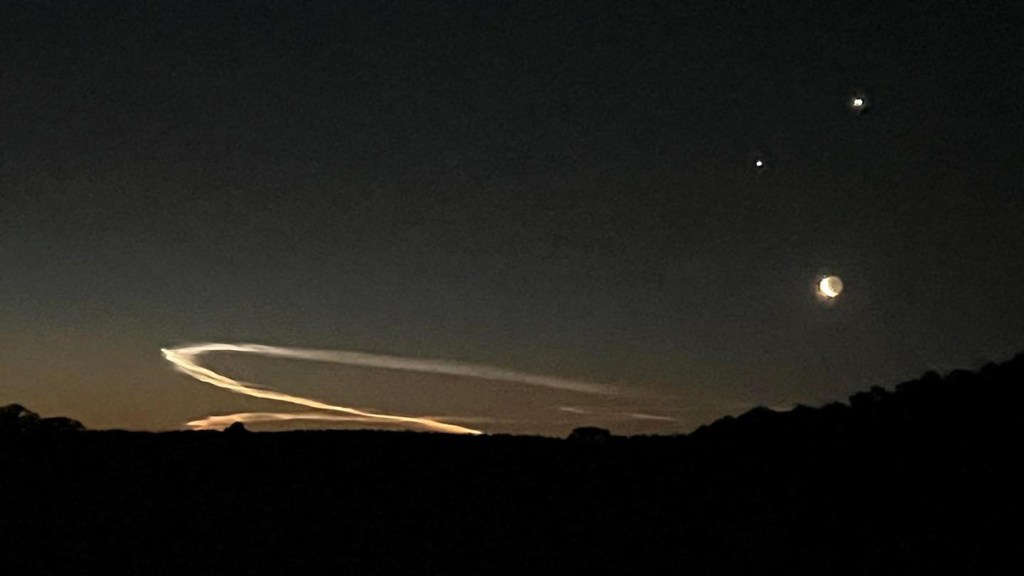 Photo submitted Smithdale resident Kelsey Kyzar submitted a photo to Jackson weather station WLBT that shows a contrail from the SpaceX Crew-4 launch this morning — along with the alignment of the moon, Jupiter and Venus.

When the sun rises in the morning you will be halfway through the month of September and a week away from the Autumn Equinox.

In essence, fall is right around the corner and Brookhaven has been treated to an appetizer of the pleasant weather. Thursday will be sunny with a high of 85 degrees and an eastern wind blowing 5 to 10 miles per hour.

Thursday night will be mostly clear with a low around 62 and an ESE wind around 5  mph. Clear skies should offer a great view of the stars.

Friday, which is the opening day of the new velvet season, should have a similar forecast.

According to the farmer’s almanac, the full moon right before Fall Equinox is called the harvest moon and was said to aid workers in the fields due to rising close to when the sun set and giving more light for a few days. This moon could be observed this week.

The next full moon after the fall equinox is called the hunter’s moon and is named it because people could see deer and other wildlife in fields they had harvested with the extra moonlight.