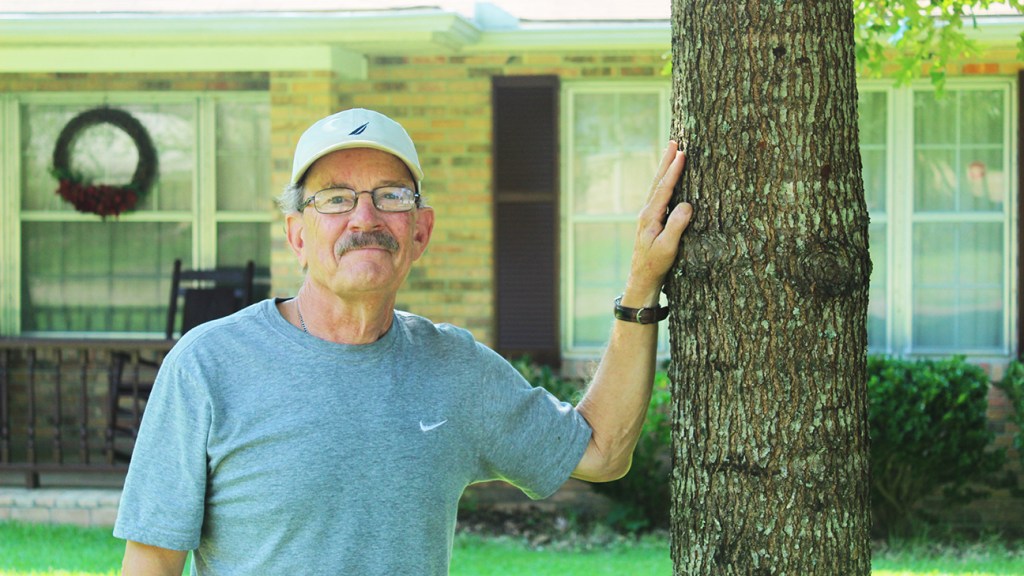 PHOTO BY HUNTER CLOUD Jim Phillips of Brookhaven says his relationship with God is the most important part of his story.

“Can I help you?” Jim Phillips asked as he poured water into a hummingbird feeder at his home on South Jackson Street close to where The Dart landed. He was intrigued by the idea of The Dart and put on a baseball cap and stepped into the shade of a tree on his front lawn.

A member of First United Methodist Church in Brookhaven, Phillips said his faith is the most important part of his story. He has taught Sunday school or worked with youth groups for 50 years. It has been a lifelong commitment to teach the kids, he said.

God has blessed him by healing him from melanoma and prostate cancer and triple bypass surgery. Phillips moved to Brookhaven in 1984, when he was diagnosed with cancer, but he grew up in Hazlehurst.

“I learned doctors do not have the final say because they told me I had a zero percent chance with melanoma. It had progressed to my lymph nodes,” he said. “The United Methodist Church in Hazlehurst and Brookhaven prayed for me and lifted me up to the Lord. The surgeon went in. After I woke up, he told me he didn’t understand how it went from progressive to regressive. It was melting away. No chemo or radiation. That was 38 years ago.”

Phillips ran distance track events in high school. He never had a chance to compete in district or state meets. From 1967 to 1969, MHSAA had a rule of one runner per school per event and his school, Forest Hill, had the state champion in the mile and half mile. He was unable to get any scholarship offers out of high school.

He went to Mississippi State University and tried out for the track team and made it. He ran six-mile and three-mile races in cross country and the one-mile and two-mile in track. After a strong performance in a meet against Alabama and other area schools, he earned a half scholarship from the Bulldogs.

“I had four great years at Mississippi State. As a distance runner at State, you would wake up and run about six miles most days,” he said. “Then you would go to class and do your labs — we had a lot of labs in Forestry, my major — and then I would go practice for a few hours on the track. Then you ate your dinner and went to bed to repeat.”

A degree in Forestry got him a job with the Mississippi Forestry Commission. For 45 years, he served as a forestry agent in the southwest district and served as the assistant district forester before retirement.

He said he spent the majority of his time working with private lands and helping landowners find state and federal cost share programs to reforest timber. At the same time, he would find a place to sell the timber for the landowners. His opinion is no landowner should bear the full cost of planting trees. It can help be a tax write off too.

It is a process he is experiencing with his daughter’s land. They plan to clear cut and replant a stand in about 10 years. His time with the forestry commission required working with the Mississippi Department of Environmental Quality and the MSU Extension Service.

One thing people may not know about the Forestry Commission is they are one of the first responders in the state. They help county volunteer firefighters fight fires and clear the roads when inclement weather hits and damages timber. It was a job he enjoyed and still misses.

“I got to play in the woods and get paid for it. I enjoyed hunting and fishing but I didn’t go crazy because I spent five days a week in the woods or doing paperwork to go to the woods,” he said. “I had a great staff and I loved working with people and probably planted thousands of acres of trees here. It was a pleasure helping people.”

He was blessed to be able to run for the majority of his life until recently. A slipped disk in his back stops him from running now. The doctors told him he could run for a few more years and end up a hunched-over man using a walker or he could take a break by biking and walking.

“I traded running for walking,” he said. “I miss running so much. I like to watch the kids from my church run. Some of them play soccer too. I’m jealous they can run. I like to tell them that I used to be young and fast when I lead the children’s sermon.”

Brookhaven has been a great place to live and raise a family. He and his wife Francis are proud of their daughter Heather Phillips Silverii. She was a valedictorian at Brookhaven Academy, an honors student at Co-Lin, earned her bachelor’s and master’s in nursing from USM and is currently a nurse in the Jackson metropolitan area, he said.

Outside of feeding the birds, working with the children’s ministry at First United Methodist Church is one of the ways he fills the vacuum of time that retirement left.

“The driving factor for me teaching the kids is Jesus is my savior. I know one day I will see Him, my family and friends in glory,” Phillips said. “I am committed to sharing about Jesus and I try to encourage the kids in their faith. I tell them ‘I’m going to heaven and I’ll take as many of you with me as I can.’”