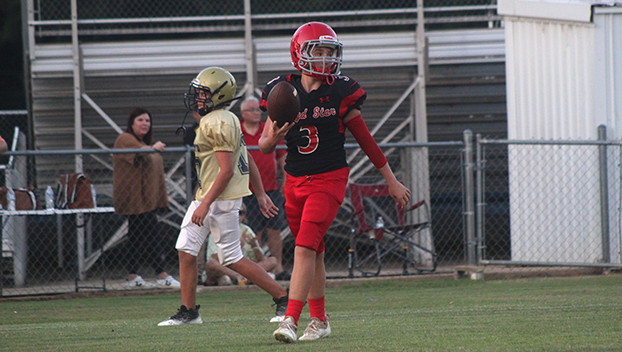 Paxton Zumbro holds the football as he walked into the end zone for a touchdown. He caught a 7 yard pass from Ross Spencer to give Loyd Star a 12-0 lead in the second half against Bogue Chitto Monday evening. Loyd Star went on to win the junior high game 20-0. (Hunter Cloud | The Daily Leader)

BOGUE CHITTO — It is homecoming week for the Bobcats and Loyd Star set out to spoil the fun in Junior High football Monday evening. The Hornets shutout Bogue Chitto 20-0 after a scoreless first half as both teams probed with runs like two heavy weights jabbing around a ring.

Loyd Star’s Carson Cunningham ran 70-yards for the first touchdown after his teammate Jaamarion Terell had run for a 60 yard score but it was called back for holding. Ross Spencer increased the Hornets lead to two possessions with a seven yard strike to wide receiver Paxton Zumbro.

“It was a post corner and the quarterback just threw a good ball,” he said. “We have been practicing and working hard five days a week. Getting outside changed the game in the second half and the blocking was better.”

Loyd Star slowed down the Bogue Chitto offense and played assignment football to stop the triple option. Late in the game, the Bobcats got desperate and started to throw the ball more. Bogue Chitto’s Aiden Kirkland said the offensive line was having a hard time blocking the Hornet’s defensive line. He did make a great play for the Bobcats in the fourth quarter when he made a leaping catch to intercept a pass from Spencer.

“I thought when I caught the ball I would score and I was there hoping my teammates could block for me,” he said. “That is all that went through my mind. I could tell by how the receiver was running he tried to cut off to the right and I jumped the route. I have made better catches before.”

His interception gave the Bobcats the football but they turned it over on downs. Loyd Star rumbled back down the field and put the exclamation point on the win with a 25 yard rush by Cunningham to make it 20-0.

Loyd Star was dominant in their win over West Lincoln to start the season and they showed the same dominance over the Bobcats. Spencer said they still have some room to grow.