Bear Football anxious to bounce back against Co-Lin 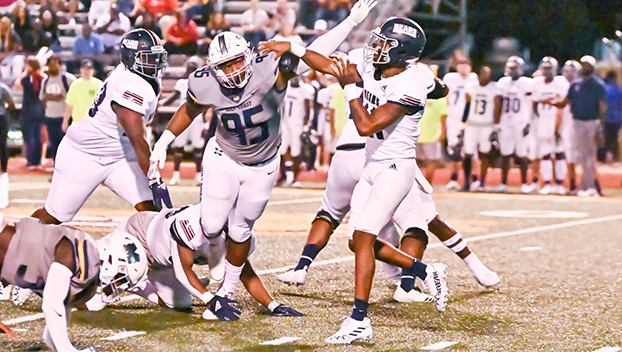 Following last week’s tough loss at Mississippi Gulf Coast in the first road test of the 2022 season, the Bears are hoping to get back to .500 in both the overall and conference standings Thursday as the rival Co-Lin Wolves come to Summit for a 7 p.m. kickoff.

The history between the Bears and the Wolves is a storied one, unfortunately for Southwest, most of the wins came from Co-Lin. In the last 11 meetings, the Wolves have won nine of them including the previous seven.

However, the 2022 Bears enter this week’s game confident that they can change Southwest’s recent fortunes against the rivals from just 32 miles away, even though it will be a tough test.

“This year’s Co-Lin team is solid,” Southwest head coach Cliff Collins said. “These guys are one of the best teams that we have faced. They have a transfer quarterback and some receivers that can make some plays down the field. The defense is solid and this is a team that had Jones on the ropes. This is a good football team that we are going to play this Thursday.”

Both teams are coming off of tough losses in Week 3. The Bears fell to the Bulldogs 45-7 while the Wolves were defeated at home by Jones 23-17 in a game that ended when the hosts came just short of scoring a game-tying touchdown as the final seconds ticked off the clock.

Even though it is a rivalry game, Collins does not want his players to lose focus.

“It’s Co-Lin for us, it is the next football game,” he said. “Our guys are attacking it as it is the next game and we have to be ready to play. I am not worried about my guys doing there things offensively and defensively. Rivalries, to me, are made by fans because players change each year.”

A personal foul penalty against quarterback Chris Roberson last week also resulted in an ejection. That will carry over into the first half of this week’s game thus giving Cameron Davis his first opportunity to start for the Bears.

“We signed Cam to play and unfortunately it is a little earlier than expected, but he will be ready to roll,” Collins said.

Davis will have the regular supporting cast of playmakers on offense in running back Damuriyon Montgomery and receivers Ja’Coby Matthews and Jacoby Bellazar.

On defense, the Bears are hoping to not only get off to another strong start against the Wolves but maintain the efficient play.

Collins adds that it is important for his players to maintain focus and to carryout the plan against Co-Lin.

The Bears and the Wolves kick off at 7 p.m. from John I. Hurst Stadium.