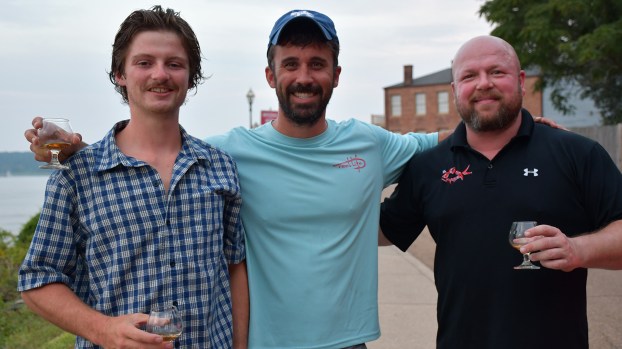 PHOTO BY BILL PERKINS From left, Loris Pattinson of Scotland, Will Dick of Kentucky and Ben Johnson of Lincoln County. 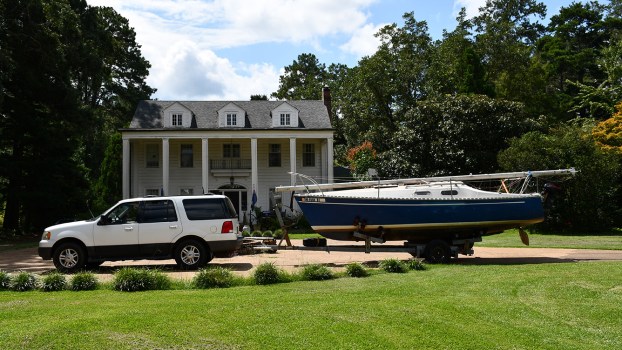 PHOTO BY BILL PERKINS The Kagni resting at Woodleigh in Brookhaven.

Some may have been wondering what a sailboat was doing resting in front of “Woodleigh,” the home of Betty Ann Perkins. Well there is an explanation and it isn’t that Betty Ann has become a yacht skipper at 92 years young.

Recently two lads sailed the “Kagni” from Memphis to New Orleans, the Gulf of Mexico and across Lake Ponchartrain to their final destination, Marina Del Ray in Madisonville.

The notion to attempt this adventure was the brainchild of Loris Pattinson, a 22-year-old Scotsman, who met his co-adventurer Will Dick, a 33 year old from Kentucky, while camping at Bryce’s Canyon National Park. They purchased the “Kagni” from Brookhaven native Ben Windham who lives in Oxford and had been enjoying sailing it on Sardis Lake the past 10 years. I learned of this crazy idea from Ben’s dad Mike Windham who also now lives in Oxford.

I reached Will by mobile phone when they were approaching Greenville.

Days later Ben Johnson and I met Will and Loris when they arrived Natchez on Labor Day taking the lads for a toast at “The Camp” and dinner at the Pig Out Inn. They miraculously made the rest of the journey dodging ocean-going ship traffic from Baton Rouge through New Orleans before arriving at the Municipal Yacht Club on Lake Ponchartrain spending their first night on land at a Fairfield Inn in the French Quarter. They enjoyed a day of sightseeing in the Big Easy and another night of rest in the Fairfield before sailing across Ponchartrain to Madisonville.

I met them there just before sunset. We loaded the boat on their trailer and retired to the nearby Italian restaurant Impastato Cellars for a celebratory fine dinner with more toasts. The following day Will flew to Puerto Rico to reunite with his girlfriend and Loris to Reno, Nevada, to visit his Scottish relatives there.

They’ve left the “Kagni” to rest with me here in Brookhaven until their next adventure which could be Chesapeake Bay and the Virginia coast where Will lives or sailing from the Mississippi coast to the Caribbean. The Chrysler 22 built in 1976 still has many more years of sailing pleasure in her future.