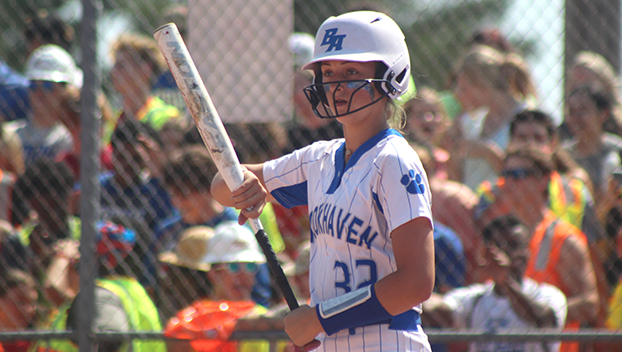 BROOKHAVEN — Rowdy crowds of students cheered their teams on in the South State Semi-Final matchup between Brookhaven Academy and Copiah Academy. After taking a 3-0 lead in the first inning, the Cougars held on to win the softball game 5-1 Monday afternoon.

Senior Sasha King opened the scoring for Brookhaven Academy and finished the day with two RBIs and two hits. She said the students ringing their cowbells and chanting helped her and the team earn a win.

“It was exciting to have that crow and it is what kept our energy up,” she said. “The fans came out and supported us today. I was ready for this game. Last night I visualized everything and the at-bats. It prepares me for everything. I knew what Copiah Academy would throw and it helped me out a lot.”

She said the team is not tired despite playing a full gauntlet of games this past week. Since Sept. 17, BA has played 10 games in eight days. They are holding their heads high and pushing through.

Kensey Covington threw seven innings giving up a run and five hits for the Cougars. She also struck out seven batters moving her to 98 strikeouts this season. Her arm might be tired but her control did not suffer in the game, out of 101 pitches she threw 75 strikes.

Morgan Chermin lit up the spray chart with three hits and crossed the plate three times. She has played softball since she was five and had a phenomenal performance at the plate. Copiah Academy put up a competitive fight. She said competition and the friends she makes in softball are what she enjoys about the game. Her attention paused to take a picture with celebrating teammates before reflecting on the game.

“I just wanted to hit line drives at the plate and take it pitch by pitch. It feels so good to have a good day,” she said. “It is awesome to have the fan support. I can hear them out on the field. We are a very close team.”

Head Coach Lisa Covington said they have already punched their ticket to the State Tournament. They will have a chance to win a South State Championship after 4p.m. today, depending on when the Copiah Academy and Oak Forest game ends.

“I’m just super proud of them,” she said.