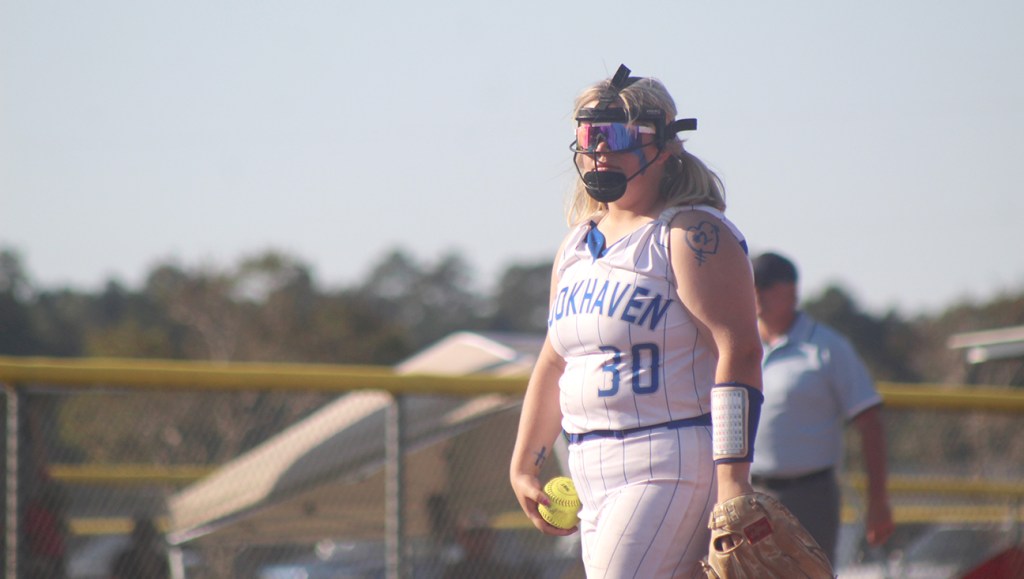 PHOTO BY HUNTER CLOUD BA sophomore pitcher Maggie Rushing and the Cougars will be back in action Saturday in Magee.

Momentum can be a fickle thing — one minute it’s with you and the next it’s against you.

Coming into the MAIS 5A South State Tournament softball finals on Monday evening, it looked like Brookhaven Academy was riding a wave of momentum after starting off the tournament with three straight wins — two on Saturday and a 5-1 victory over Copiah Academy on Monday afternoon that kept the Cougars unbeaten and put them into the tourney finals.

Oak Forest Academy, a district opponent for the Cougars, stormed back from the loser’s bracket to defeat Brookhaven twice on Monday for the tournament championship as everything kept coming up in favor of the visitors from Amite, Louisiana.

OFA held off a comeback attempt in the first game between the schools Monday by a 7-6 final score and set up a winner-take-all matchup that they won 4-0.

Brookhaven Academy didn’t win the south state tournament last season either. Like the 2022 tournament, it was played in front of huge home crowds at the Hansel King Sports Complex in Brookhaven.

In 2021, the Cougars bounced back to win the MAIS 5A State Tournament a week after losing in the championship of the 5A South State Tourney, a feat they’ll hope to repeat when the state championship tourney begins on Saturday, Oct. 1 at the Magee Sportsplex.

Bayou, located in Cleveland, lost 5-2 to Magnolia Heights in the MAIS 5A North State Tournament on Monday.

The winner between Brookhaven and Bayou will face the winner of East Rankin and Columbia Academy on Saturday in a game that’s scheduled to begin at 4 p.m.

BA had gotten tournament play started on Saturday with a 14-2 blowout of Adams County Christian School and a 5-2 win over their district rivals from Columbia Academy.

It was a nice bounce-back win over Columbia after they beat the Cougars 7-1 when the two teams last met on Sept. 8.

The victory against Columbia was powered by a double from Brookhaven right fielder Miriam Wallace and a home run from freshman first baseman Morgan Chemin.

When tournament play restarted on Monday, BA kept themselves in the winners’ bracket with their victory over Copiah.

The Cougars jumped out to an early lead with three runs in the top of the first inning against Copiah as they outhit the Colonels 9-5 in the win.

Covington pitched the win by scattering five hits and giving up one unearned run in seven innings. The sophomore pitcher walked just one Copiah batter and struck out seven in the win.

Sophomore Maggie Rushing pitched for BA in the first game against Oak Forest on Monday.

Her emergence as a starting pitcher to pair alongside Covington has made BA a better team. Rushing struck out seven in the first win of the tournament over ACCS on Saturday.

Against Oak Forest, she gave up just six hits and struck out six batters while walking one in seven full innings.

A combined eight errors in the game are what did Rushing and the Cougars in and helped OFA earn the win despite BA outhitting the Yellow Jackets 13-6.

In the game that immediately followed the first Oak Forest win, the Cougars failed to get the big, timely hits needed with runners in scoring position.

They again had runners at second and third with one away in the fifth, before OFA got a strike out and a ground out to end the frame.

In the first game between BA and Oak Forest on Monday, the Cougars led 2-1 after one complete inning. OFA scored at least one run in the first five innings though and led 7-2 going into the final BA at-bat of the game.

The Cougars very nearly clawed back to tie things up as Bailey Parks started the bottom of the seventh off with a single and then moved to third when Wallace singled.

Chemin drove in Parks with a single and then scored on a single by Chemin. BA got further run support in the inning when Jergins doubled to score Chemin.

Jergins then scored on a wild pitch and Poole came across via an error, but OFA got a strikeout to end the game with the tying run for BA on second base.

BA coach Lisa Covington and her team have plenty of familiarity with the other seven teams in the field at this weekend’s state tournament.

They beat East Rankin 9-4 in early August when the two teams met. Simpson Academy finished as the no. 4 see from the North State Tournament, they beat BA 2-1 on July 30.

Bayou and Magnolia Heights (Senatobia) are the only teams in the tourney that Brookhaven hasn’t played this season.

Once the 5A State Tournament reaches a point where one team has won the loser’s bracket and another team has won three straight games in the winner’s bracket — those two teams then play in a three game series for the state title.

Cliff Furr and Hunter Cloud contributed to this story.