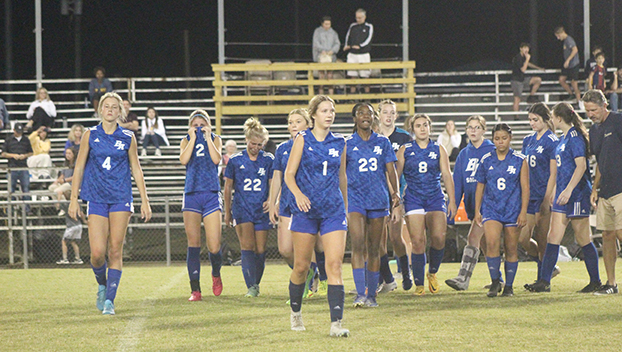 BROOKHAVEN — Madison St. Joe struck a fatal blow to the Brookhaven Academy soccer season Tuesday night. They scored three goals in the first half to beat the Cougars on their home turf in the first round of the MAIS Girls Soccer Playoffs.

It was a tough way to end a season where Brookhaven Academy won a district championship and had secured home field advantage up until south state. Head Coach Alex Brown told the girls after the game he was proud of their season and that soccer was a cruel game.

Soccer is a cruel game. Madison St. Joe controlled possession for the majority of the match but the Brookhaven Academy defensive backline and goalkeeper Ainsley Orr played solid for 72 minutes. The other eight minutes lead to goals Brown’s squad should not have conceded.

“We had some things not go our way there late in the first half and those moments ended up sealing our fate as far as the score went,” he said.

A handball in the box conceded a penalty and a second goal for Madison St. Joe. Minutes later, a turnover by the Cougars led to a breakaway chance which was slotted home to make it 3-0. The halftime whistle blew shortly after.

Brown gave a pep talk to the team at halftime. He charged them to give 100 percent on the pitch and to win the second half. Senior Kate LeBlanc said the third goal hurt but it didn’t finish off the team.

“In the second half, our younger girls wanted to play for us. We were still confident. That third goal before half stung a lot,” LeBlanc said. “It was rough because those two goals were back to back. I think we played as hard as we could.”

Brookhaven Academy made a tactical change switching from a 4-3-2-1 formation to a 4-3-3 formation. It made a difference as the Cougars were able to press and create chances in the second half.

BA’s Karen Hernandez delivered a free kick into the box and created a goal-mount scramble and Madison St. Joe failed to clear the ball. LeBlanc struck the ball with the toe of her right boot to put it in the back of the net, cutting the deficit to 3-1.

“I just tried to get any piece of my body on it,” she said. “It pumped us up and it gave us a little more hope. We had lifted spirits.”

Her senior teammate Kyla Armistad said they were down at half time but Brown’s speech and LeBlanc’s goal lifted the team. They pressed on for more goals and had some more chances thanks to the tenacious attacking pressure of Reagan Fortenberry and Mallory Martin.

A second or third goal eluded Brookhaven Academy in the final 15 minutes. They were still pressing for scoring chances when the final whistle blew. Armistad was one of a few seniors not crying immediately after the match.

“I have no regrets, we played as hard as we could. Madison St. Joe played very well, they spaced well and they were coached well,” Armistad said. “We were a great group of girls this season. We are really close and every year I have been here the team has been good and supportive. We pump each other up.”

She is not done representing Brookhaven Academy athletically yet. Her attention shifts to basketball practice starting Wednesday.

LeBlanc said she is going to miss her fist bumps with assistant coach Brannon Dickerson before every game and after practice. She added each class had great chemistry outside of soccer and were good friends.

Brown told his team they had set a standard this season. Their fight in the second half told him a lot about what the future might have in store for the Cougars squad. He was proud of them.

“I think a person’s true character is revealed in adversity and we dealt with things tonight we hadn’t dealt with before. To see the mentality and spirit they had tonight was a blessing,” Brown said. “We have a ton of underclassmen who got a lot of minutes tonight. There is no substitute for the experience they gained this season and in tonight’s game. I’m excited for the future. I’m fortunate to lead and coach such great kids. They are a blessing.”