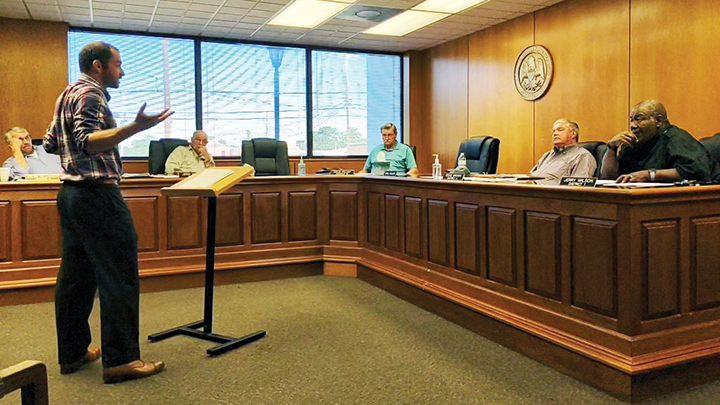 One week ago, the Lincoln County Board of Supervisors heard from David Rankin, a contractor for the office of Lincoln County Tax Assessor/Collector Blake Pickering’s office, about “hundreds of problem stacks” of issues with missing deeds, deeds not recorded, data quality problems (numbers not matching other lists), among other troubles.

This week, Pickering explained to supervisors about how the problems occur and how Atlas, the cloud-based system they were depending upon, failed.

The discussion started at the supervisors’ Monday meeting when Pickering first asked the board to approve removing Homestead exemptions from 25-plus properties.

“These look like they are bank-owned, and a Homestead exemption property can’t be in a business name,” he said of many of the properties found when he had employees do “general maintenance” of the Homestead rolls.

Supervisors seemed unwilling to make a sweeping change to the Homestead rolls without further conversations about the original problems with deeds throwing out errors.

District 5’s Doug Falvey asked why Pickering was presenting 25-plus properties for changes instead of each as it was first found. Pickering said that some of the people said they were going to fix it, but never did and it kept rolling through year after year. Falvey then inspected the stack, which he said went back to 1993.

Pickering said he didn’t have the manpower to go through the rolls to find such anomalies, but he assigned someone to do so to “clean up” the rolls, much as he’s been doing recently with the mobile home rolls.

District 4’s Eddie Brown said for Pickering to bring them back when County Attorney Will Allen was present.

“I’d rather wait until Will is here,” he said. “We’ve had so many issues, that I’d rather have a lawyer” look into it. Pickering said that was fine and he could also just leave them on the roll if supervisors desired it.

“No, I don’t want to leave them on the roll; I just want Will here,” Brown added.

Pickering moved on to the issues from last week about the problem stacks that were in the hundreds, according to Rankin.

“What we are understanding, the list keeps growing and nobody’s working on it,” Brown said to Pickering.

“That list, to be perfectly honest, is mostly garbage,” Pickering said.

“Why would you say it’s garbage?” Brown asked. “I’m looking at a 56-year tax man [Rankin] who has been working on this stuff for years and he comes in here and tells me there’s errors.”

“He’s referring to errors on the GIS map,” Pickering answered. “What he is calling an error and what would be realistically an error are not necessarily the same thing. If you look at the list, 726 of those errors are from a rollover that was done in 2015. Now, one thing you have to keep in mind is that if you look at the GIS map, there are separate acreages for each parcel: calculated (physically measured out on the map), appraised acreage, deeded acreage and GIS acreage. If any of the numbers on one of these four is different, it’s counted as an ‘error.’”

Though these errors don’t hurt the county or cost the county any money, it still showing errors and the supervisors weren’t happy about them. However, Pickering said he personally checked the list and couldn’t find any errors at all in some of them.

Pickering said that Rankin told him more than a year ago he would come to Pickering with any system issues, but “the first time I heard there was any issue in mapping was when [the board] called me about them,” he said.

Brown then said that Allen told him that he wanted a meeting with Pickering and others to get down to the reason for these errors and misunderstandings. Pickering agreed about the meeting.

Pickering further explained all the problems they found with accessing the Atlas program and how he had communicated to Rankin to that effect.

“It was a disaster,” Pickering said. “I saw it with my own eyes what a disaster it was.”

“It’s not a massive stack of errors that you were led to believe it was,” Pickering said. “It’s not possible to have this much information missing [on the deeds].”

To end the confusing conversation, District 2’s Jerry McGehee said, “I think the best thing to do is having a meeting with Will.”

“This is not going anywhere. I have — I’ll tell you up front – I have no doubts that David’s right,” Brown said to Pickering. “You know, you’ve stood right here in this boardroom and told us stories. And you know you have. I know what’s happened in the past.”

Pickering had said last week that the cloud-based server they were working with “didn’t work,” but “for the most part, for the purposes for taxation, our [information] is correct — as correct as we can get it.”