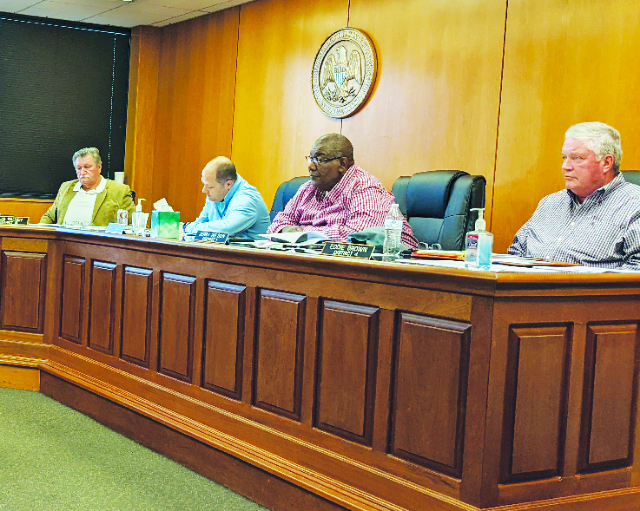 Lincoln County supervisors once again heard from a St. Paul’s road resident about the condition of the road.

Mattie Williams requested again for the road to be repaved, only to be told again that there was no money for the work – at least not right now.

“The dust is just steadily rolling,” Williams said, using her arm to show how the road’s surface rises to cover everything in sight.

“Driving on the road makes it worse. The curb needs to be built back up – the whole road is worse than it’s ever been. People won’t even come down the road to go to church. The dust keeps going and [those of us with asthma] suffer. I would have rather you had just left the road alone instead of putting it to gravel.”

District 5’s Doug Falvey stressed to Williams that he understood residents’ issues with the road, but he still doesn’t have the money to repave it at this time.

“We turned it back to gravel because you can only pave a road so many times,” he said. “When it comes to repaving roads, we’ve got to pick and choose which we can afford to do. That road would cost $200,000 to do and we just don’t have it.”

When Williams asked about using some of the American Rescue Plan Act funds to fix St. Paul’s Road, several supervisors spoke up to say they had already budgeted that money to the worst roads or the ones with the most traffic.

“Mrs. Williams,” said District 3’s Nolan Williamson, “we understand the situation — we do. But we are already two and a half years behind from this budgeting and road work because the people in Washington D.C. and in Jackson held this up. We are just now getting started getting bids because we’ve had to wait so long [to get the remaining funds deposited].”

Williams asked if supervisors would make an exception and repave St. Paul’s as well as install “Children at Play” signs and re-gravel the church’s driveway. Supervisors said the signs are not a problem, but repaving a private driveway was.

“We can’t do work on a private driveway,” Falvey said.

Williams asked them to come dump the gravel near the church and she herself would dig out the gravel and place it in the private drive.

Once again, supervisors warned her that was illegal and they wouldn’t be a part of such action. Williams said she didn’t know that supervisors couldn’t work on private driveways and said she was not asking anyone to do anything illegal.

According to the Mississippi Association of Supervisors, supervisors are not allowed to dump gravel or dirt since it would be considered “an illegal donation under Section 66 of the Mississippi Constitution, and could subject the supervisor or road manager to personal liability.” The only type of material that can be legally left for residents is called “spoil material” that comes after the completion of a project, such as cleaning out ditches at or around the residents’ private property.

In other news, the Board of Supervisors approved the following:

• A change order presented by County Engineer Ryan Holmes for $1,800 for some sheet metal work needed on a current project

• Budget transfer of funds for the new fiscal year

• Advertising for financing for District 3 equipment

• A letter of understanding between the MEA Drug Testing Consortium

• Renewal of a service agreement with DCS Inc. Support Services

• Waiting to discuss school bus turnarounds and deed issues with the tax assessor’s office until County Attorney Will Allen, who was absent Monday due to federal court duties, can be present.