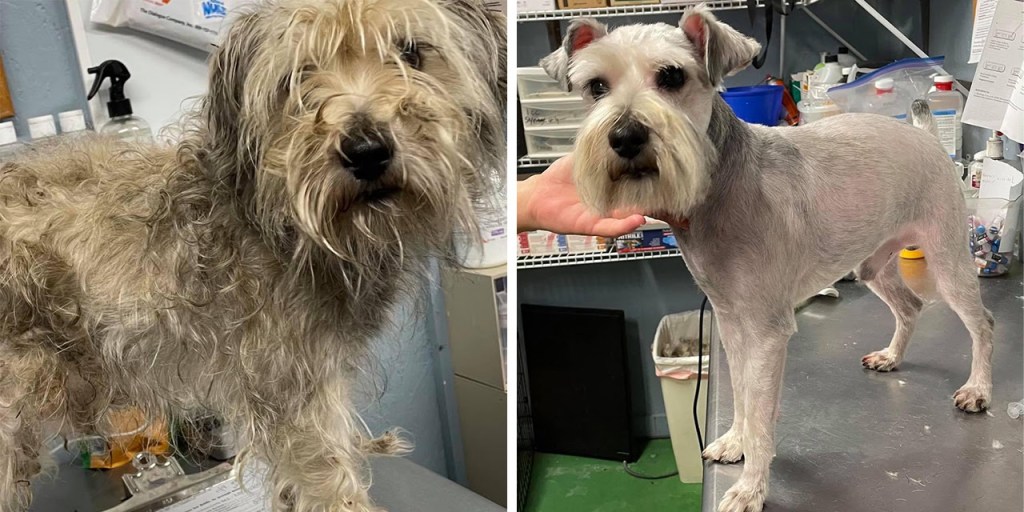 PHOTOS SUBMITTED Bentley before and after grooming at BARL.

This past calendar year, a local deputy noticed several times a mess of a dog hanging out by a bridge in Brookhaven. Once finally captured, the dog found itself at the Brookhaven Animal Rescue League (BARL) for care.

A volunteer groomer worked her magic, transforming the chaos of matted fuzz into a handsome gentleman now named “Bentley.” The pooch has been adopted into a loving home, where his bridge hangout has been traded for a comfy couch.

Bentley’s story continues as he has been named a finalist in the 11th annual Dirty Dogs Contest, the brainchild of pet industry leaders Wahl – a company that offers a full line of pet grooming solutions that make grooming from home safe, easy and enjoyable – and Greater Good Charities – a global nonprofit that works to help people, pets, and the planet by mobilizing response to needed help – along with partner The Animal Rescue Site.

The contest donates grooming supplies, and in turn, rescues and shelters share remarkable “Before & After” makeover photos — including the “Top 10 Shelter Dog Makeovers of 2022.”

Bentley is now on that list. “With a little care, dogs can become so beautiful – it’s an amazing turnaround,” said BARL volunteer Rusty Adcock. “We’re excited for Bentley – it’s amazing how much a cleaned-up dog can be so much more healthy and ready to be adopted. He’s doing great in his new home.”

Adcock said if BARL wins one of the prizes, the money could go for funding spaying or neutering and to help future Bentleys.

“Good grooming and a little TLC can change a dog’s life; not only do they feel healthier and happier, but their true personality can also finally shine through,” said Lee Asher, a well-known media personality who sings the praises of shelter adoptions. “Sometimes, that’s all it takes to capture the heart of their new human.”

Dog lovers are a breed all their own, and some would say Asher leads the pack. Asher’s 25-acre Oregon-based sanctuary provides a home for rescue dogs, donkeys, pigs, an alpaca, a goat and a llama. After traveling the country for the last several years with his posse of rescue pooches, Asher now runs the sanctuary for at-risk animals as he continues to educate people on the rewards of rescue.

“If shelter dogs could talk, they would have amazing stories to tell; unfortunately, they can’t,” said Asher. “I’m happy to lend my voice and help shed some light on the importance of grooming when it comes to adoption.”

For the last 11 years, Wahl’s donation of pet grooming supplies has helped transform hundreds of thousands of dogs and get them ready for adoption. This year more than 200 makeovers were submitted into the Dirty Dogs Contest, and 10 were chosen as finalists.

Visitors to the contest page can see what each dog looked like when they arrived at the shelter or rescue, and how they transformed once they were groomed. They can also learn more about the dogs’ backgrounds and share their favorites on social media.

Most importantly, they can vote for one of the Top 10 Dirty Dogs, and the shelter or rescue affiliated with the winning dogs will receive monetary grants to further support their efforts. First place takes home $10,000, second place receives $3,000 and third place earns $2,000.

From now until Oct. 28, the public can vote on their top three dogs, and the organizations affiliated with these dogs to be rewarded.

Visit DirtyDogsContest.com to see amazing makeovers and vote for your favorite.