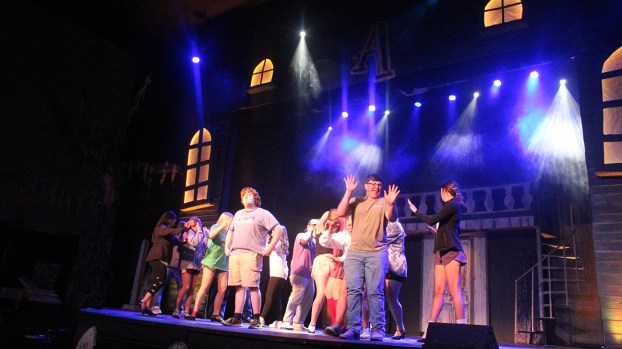 PHOTO BY HUNTER CLOUD A mild-macabre humor comedy, the play features musical acts and choreography and a love story. It has everything and is a great family friendly show. 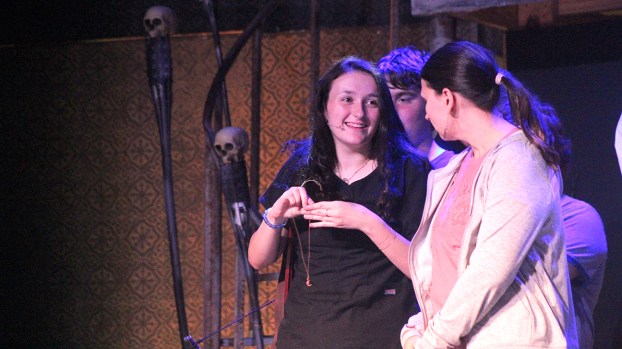 PHOTO BY HUNTER CLOUD Laney Perkins, left, plays the role of Wednesday Addams. It is a challenge because she is a bright smiley person but the character is supposed to be a princess of darkness.

Happy Halloween and production month for the Brookhaven Little Theatre. From Oct.20 to Oct. 30, the theater will produce “The Addams Family, a musical comedy,” presented by Insurance & Risk Management.

“I’m ecstatic about all of it and just doing the show,” Perkins said. “It is a little different playing the role of Wednesday Addams but it is so fun. It is a bit of a challenge. I’m more of a smiley person and she is not.”

Perkins started doing theater five years ago at Parklane Academy and has done a few plays with the community theater in McComb. Addams family will be her first play with the Brookhaven Little Theatre.

She said she saw an advertisement for tryouts and decided she was going to give it a try. Their work on the play started at the end of August and as they get closer Perkins is ready to see all of their work come to fruition.

“Memorizing your lines just takes lots and lots of repetition. I just read it over and over,” she said. “The cast has grown close because as you keep being with someone for a couple of months you inherently get closer. I’m ready to see it all come together.”

The production lasts for two and a half hours with one intermission. According to the Little Theater’s synopsis, Addams Family is a “comical feast that embraces the wackiness in every family, it is an original story and it’s every father’s nightmare: Wednesday Addams, the ultimate princess of darkness, has grown up and fallen in love with a sweet, smart young man from a respectable family– a man her parents have never met.”

Most of the story centers around the preparation and duration of the first dinner between the two lover’s families where two worlds of yellow sunflowers and dark meet. This show is recommended for all ages.

It does feature mild macabre humor and musical songs with dancing acts. Even the characters in the background play a part as they juke and jive along and add a layer to the story telling. The casting is exceptional.

Brown is naturally tall and plays the role of the Addams Family butler named Lurch, a tall zombie-like character who moves slowly. His vocal lines are simple in nature but require a deep voice. He has to do a bit of a vocal warmup before going on stage.

“I grew up watching Addams Family as a kid. I knew who all of the characters were. I came and tried out and there was only one part I was interested in,” he said. “My favorite character is a toss up between Lurch and Gomez Adams. I like Lurch because you don’t do much other than a low growl but are involved the entire time.”

He started getting involved with the Brookhaven Little Theatre about seven or eight years ago with his family. Wingfield High School where he graduated from had productions like the BLT. When he came down to Brookhaven he wanted to be a part of theater again. His son Joshua tried out for the Christmas Carol and has since been in eight productions.

One of the things he enjoys about the community theater is the camaraderie and bonds that form over the course of a production. People are able to make lifelong friends with a cast that ranges from grandpas to kids.

Sometimes, he gets off work tired from a long day at Deaconess Hospice where he handles marketing. For example, Thursday he drove about 170 miles from Brookhaven to Natchez and down to Wilkinson County. Something changes when he walks in the door at the BLT.

“You come up here and you are re-energized. You don’t think about how tired you are. You get around the kids and you get to talking and laughing,” he said. “You get to hang out with a lot of folks and enjoy it. You get a kick out of performing. No one else sees what goes on backstage because we might be talking about the football game. The minute you walk out, you become your character. That is what is fun, you get to be someone for a little bit.”

While there is a lot of energy for the first show on Oct. 20, it will change by Oct. 30. He said the last show is always tough.

“The sad part is when you know the last performance you may not see them in another play. You miss them because they become like family,” Brown said. “You are around them more than your own family. It is sad to know that time is coming to an end with the last show.”

Come and get a taste of The Addams Family. Tickets can be purchased online and are $17 to $32 with fees included.