Team Brake Down gears up for busy season 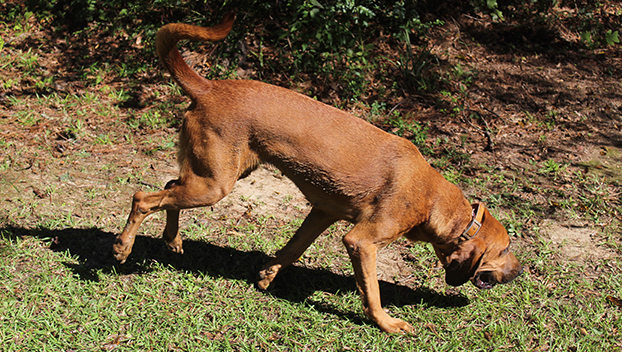 BROOKHAVEN — Team Brake Down Blood Trailing group is gearing up for another busy deer season. Last year, they recovered 409 deer for hunters across Mississippi and Louisiana and already they had a busy start to the September Velvet Season recovering five deer.

John David Paulk, Jeffery Nunnery, Thomas “Papa T” Leroy Arnold, Rusty Everett, Justin Williams and Bo Bryant started the group about six years ago working the area from Natchez to Tylertown. It has since grown to a statewide group with 17 trackers which can be found on the Team Brake Down Facebook page.

Everrett said one of the reasons he started tracking deer with dogs was because he wanted to ethically find the deer and recover it so it did not get killed by coyotes or lost. Arnold said last year it helps to bring closure or peace of mind if a hunter was not sure of their shot.

Brake down trackers train their dogs to find a scent released when a deer has been stressed either by being shot or hit by a car. It is then released through the interdigital gland in the deer’s hooves. Dogs are trained to follow this scent instead of blood because sometimes a blood trail will start and stop, sometimes it gets messed up by a human walking down a blood trail.

There is a simple checklist hunters should run through when they first shoot a deer and are concerned with their shot, if it went down or where the animal went. What they shot it with, what direction did they go, what time and what size was the deer, Nunnery said. This can help trackers understand where to start if they are called in.

Hunters should be careful when recovering a deer. If they are not recovered in the first 100 yards, Nunnery said it is best to back out and call trackers. Sometimes deer can jump up and run off and it makes the tracking process more difficult or they might not be fatally wounded.