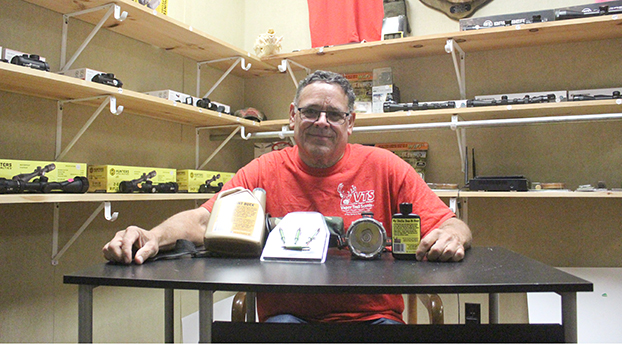 Rex Holmes jr. is a Tylertown native whose love for the outdoors began with his dad, a fisherman, and his grandpa, a hunter. Now, he owns an outdoor company that sells a wide variety of hunting and fishing gear. (Hunter Cloud | The Natchez Democrat)

NATCHEZ — Tylertown native Rex Holmes Jr. has a wide variety of interests ranging from the Bible, politics and COVID-19. His greatest interest, and the one he is most passionate about, is the great outdoors.

His business is Vapor Trail Scents.

Since 1985, Holmes has lived on a plot of land in Sandy Creek Wildlife Management Area. Before then, he said his dad was a fisherman and his grandpa was an avid hunter. Tylertown is where he got his start in the outdoors.

“On Friday after school I would get on the bus with my grandpa, who drove the bus,” Holmes said. “We would hunt all weekend. Back then we didn’t know anything about hunting seasons, we just hunted.  Now, I sit there and watch the deer. I love sitting in a tree and watching.”

His outdoors pursuits have taken him all over the continent. Once, he spent two weeks fishing in the Canadian Bush with some friends. The bugs were so bad they had to cover their arms, legs and face in mud to keep them off.

Before he started his company Vapor Trails Scent, he worked as a welder and pipefitter like his dad. Traveling all around the country, he would work six months and try to take the time off in the winter to hunt.

One year, his buddies from a hunting lease near Woodville took a hunting trip to Alabama. In Alabama, they went to hunt a ryegrass food plot. From the box stand, Holmes noticed deer would walk out into the field, catch their scent and run off.

“I said there has to be a way to cover up your scent,” Holmes said. “That is when I came up with the vapor maker. Did you know that people wouldn’t buy something if they can’t smell it. The corn scent is in there to give something for people to smell.”

He realized the power of his scent coverup was when he hunted in Illinois. While filling up his boat with gas, some spilled on his arm. He sprayed a bottle of scent eliminator on it but could still smell the gasoline. Then he decided to take a solution he had made called 33-point buck.

At the time it was being sold as an attractant. When it covered up the smell of gasoline, it hit him that it could sell as a scent eliminator.

“God had to hit us in the head to show us what we had,” Holmes said. “I went to St. Louis and bought every scent eliminator out there from Bass Pro or Cabelas. Then I tested it out with women to see if they could smell the difference and most said the scent of gasoline and Listerine was covered up.”

He said he had no knowledge of marketing when he started the company. His girlfriend at the time was Sheila Rushing and they started making labels and designing the packaging. One of his doe-n-heat attractants bears her name, he said.

In addition to selling scents, he sells headlamps which show what percentage of battery life the light has. They are also selling a broadhead which causes a great deal of internal damage when it hits a deer or hog. Currently, he has a few other products in development which could solve even more problems for hunters.