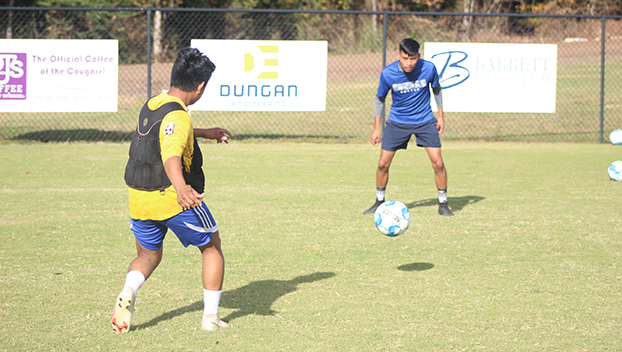 Enrique Hernandez makes a pass to his cousin, more like a brother, Yojan in a passing drill Monday afternoon. (Hunter Cloud | The Daily Leader)

BROOKHAVEN — Soccer season will kick off in a couple of weeks and Brookhaven Academy is gearing up for another district campaign. They are training with a purpose to win a district title out right, last year they were co-district champs, and to avenge a 3-1 loss to Madison St. Joe in the playoffs.

At the forefront of the Cougar squad are cousins Enrique and Yojan Hernandez. They are more like brothers, Yojan said. Head Coach Alex Brown said he expects the two to be leaders on the team this year.

Enrique and Yojan are in their second year at Brookhaven Academy after transferring from Bogue Chitto. Last year, Yojan scored 29 goals and had 16 assists while his cousin Enrique had 10 goals and 19 assists.

“Soccer is the best thing you will ever find. You think about everything. It helps when you are in school,” Yojan said. “My passion is just scoring and competing. Helping the team out is a passion too. It is what my passion is, I love soccer.

He started playing when he was three. His father was, and still is, an avid Barcelona fan who decided to train Yojan in soccer. The training helped him develop a solid touch and be a better player.

Barcelona is his favorite team although he has grown to appreciate soccer throughout the different leagues. His dad wants him to comprehend how Barcelona plays and how well the team works together.

“We are trying to show that teamwork here and cover each other’s backs,” Yojan said. “We don’t let anyone go down. We want to go further than last year and be better individually and as a team.”

Yojan’s dream is to play college soccer and wherever God has a plan for him he will go. He is just a sophomore and senior Enrique is hoping to play soccer at Copiah-Lincoln Community College.

Enrique started playing soccer when he was 13. Each day he is trying to improve his quality and impact on the team. Brown said Enrique will train every day in a 30 pound weight vest and will not take it off for the team runs, drills or scrimmages.

It was a decision Enrique made for this season as he has a mindset to up the standard. He said the vest is supposed to push him when he gets tired and make him play better. Brown said Enrique and Yojan made an impact by approaching the game with such seriousness.

“The standard they set at training, those boys love the game and demand the highest quality from not only the rest of the team but each other,” Brown said. “Their attitude towards the game is contagious. It has rubbed off on their teammates. I have watched them raise everyone else’s level as players. They are phenomenal teammates.”

Enrique said his teammates are an inspiration to him and he is happy to see how they support one another. Ultimately this season, his goal is to win a state championship for Brookhaven Academy.

It will take a team that works together and tries hard. He will have to be a good teammate to help get them there, he said. One of the ways Enrique improves his soccer ability is playing in an adult league in Jackson.

The men are bigger and stronger so it teaches him how to be creative to find space and improve his own physicality. Soccer is a game that is constantly calling to him. Whenever he sees someone playing soccer he wants to play. Enrique said playing alongside his cousin is fun because they keep each other going.

Brown said he teaches both of the boys in his Spanish class. They are excellent and quiet students.

“It’s probably because they are thinking about soccer,” Brown said. “On the field, they are two of the most competitive kids I have ever coached. All they want is for the team to win. They come to training and to the pitch each day with the right intent.”