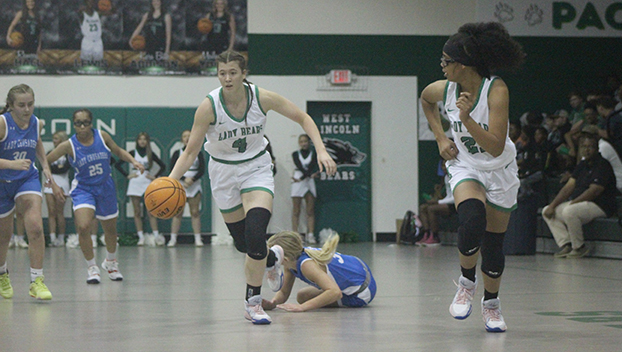 Kara Beth Addison helped the West Lincoln girls team get out to a 55-17 win Tuesday night. The senior forward scored 10 points and helped play a big role on defense in the win. (Hunter Cloud | The Daily Leader)

WEST LINCOLN — After a trip to the big house last year, West Lincoln is locked and loaded for the 2022-2023 girls basketball season. They opened the season in style with a 55-17 win over Sacred Heart. West Lincoln scored 43 points in the first half Tuesday night.

Defense played a big role in the victory as the starting lineup conceded 5 points in the first half. Younger players got a chance to play in the second half. Senior Kara Beth Addison said it was important for them to open the season strong.

“Every team we play, we try to come out strong and we have worked on doing that this year,” Addison said. “We want to come out quick and strike first. I think we have gotten better as a team from last year.”

Addison and her teammate Ramsey Hall were a two prong attack in the half court forcing turnovers and creating fast break chances. Addison finished with 10 points as did senior teammate Hall. Senior forward Ta’kyla Brothern finished the night with eight points.

West Lincoln moved the ball well on the perimeter and took time in possession to find the right shot opportunity. Despite the blowout win, Addison said there is always something that could be worked on.

She said rebounding and improving the little things will be takeaways from the win. Their goal is to get better with each game and get back to the big house to play for a state title.

It was her last “first” game of a West Lincoln basketball season. A bittersweet moment as she starts her last campaign with her teammates. They have played together since about sixth grade at West Lincoln.

“It is surreal and sad. I don’t try to think about when this season ends. We are close and have grown up together, we love every second together,” Addison said. “It means everything to have a close team. When you clash it affects how you play. We pick each other up when we are down.”