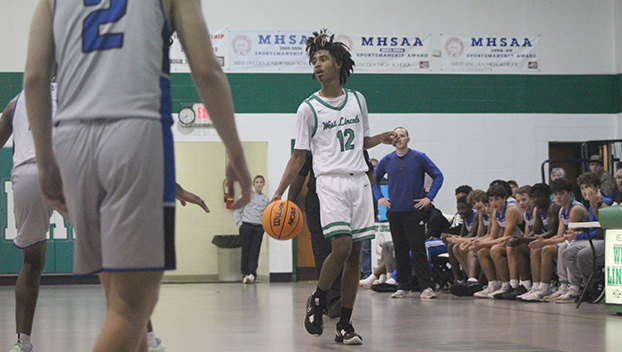 Tyquarius Terrell helped his team down the stretch. He finished the night with nine points, making four free throws in the second half when they mattered most. West Lincoln still fell to Sacred Heart 36-35. (Hunter Cloud | The Daily Leader)

WEST LINCOLN — Sacred Heart did not have a lead for the majority of the game until the final quarter of play. West Lincoln had chances to win in the final moments but fell 36-35 as time expired to open the boys basketball season Tuesday night.

Sophomore Tyquarius Terrell stepped up in a big moment for his team. With 18 seconds left, he stepped up to the line and it’s the team down 3 points and sank both free throws.

Cheerleaders and fans went berserk on the sidelines. He had also made a big defensive play to close the gap in the final minute.

“I was just thinking I can’t miss. It felt good to be at the line with the game in my hands,” Terrell said. “It’s disappointing we lost but we played hard. We have come a long way as a team from previous seasons. As long as we keep improving we will hit those last shots.”

Head Coach Jay Case is to thank for the improvements, Terrell said. His coach was a little disappointed in how the game finished. West Lincoln made little mistakes and those added up in the end.

West Lincoln’s crowd had some impact in those final moments as the fervent fanatic frenzy manifested chaos on the court. A travel by Sacred Heart with 3.8 seconds left actually gave West Lincoln a chance at a last second shot.

Sophomore Dereon Eley, a shooting guard, attempted a three-pointer but it was blocked. He sank to the court in disappointment but Terrell was there to pick him up.

Case said they had just gotten their football guys over the last two days and hadn’t had a chance to really implement any plays. They have a long season ahead and will get better.

“I loved our effort tonight. We fought back and had a chance to win in the final minutes,” Case said. “We have done a lot of good stuff. If they have a good attitude and play hard I will be proud of them.”

Senior Javarius Lewis was on the sidelines in a blue t-shirt and blue jeans. A black knee brace and a possible ligament injury kept him out of the game. He is an important piece to the team.

“He is my team leader. Not having him there or in practice it has hurt,” Case said. “He keeps them energized. It really hurts to have him out. We will find out Friday if he will be back this season or not.”