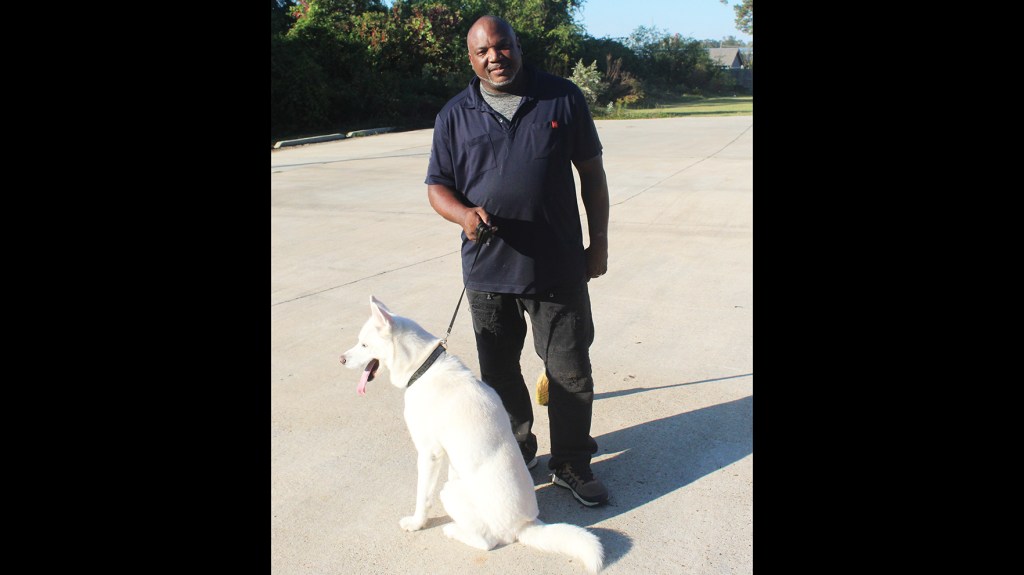 PHOTO BY HUNTER CLOUD Lorenzo Smith and his dog Loki, who was distracted by cars on East Court Street by Mama Ruby’s close to where The Dart landed. Smith is a native of Chicago but now calls Brookhaven his home. He can be seen on the sidelines as an official.

BROOKHAVEN — Lorenzo Smith was walking his dog Loki down the sidewalk of East Court by Mama Ruby’s close to where The Dart landed Thursday afternoon. It was a beautiful day and the smell of grills cooking by Brookhaven High School drifted downwind. He was on his way to officiate a football game, he said.

Smith is originally from Chicago but moved down to Brookhaven after high school. His mom was a Brookhaven native and he spent the summers visiting his grandparents in Brookhaven. He said he believed in his heart that one day he would live in Brookhaven.

Funny how life turned out. He has been in love with the town since he first moved here permanently. It is a community where he is able to enjoy the peace and quiet and yet stay involved with molding the next generation and watching them grow up. He also enjoys his late night work at McDonald’s.

“Brookhaven is the greatest place in the world. There is peace and I get to work with the kids by officiating games. I can see where they are in life,” he said. “My uncle was an official and he brought me into it. I never thought I would do it but here I am, officiating 15 years later.”

Basketball, baseball and football are the sports he officiates. Smith said basketball is his favorite sport to work. One of the blessings of officiating is seeing kids he called games of in pee-wee hoops continue on into high school basketball.

Aside from work, Smith enjoys the peace of fishing and playing corn hole. Ping-Pong is another favorite of his. He said he also enjoys watching TV and if he gets to watching he won’t move. Battlebots, Swamp People and Gold Rush are some of his favorite reality shows although he enjoys watching sports the most.

Smith has a real love for sports. It is what has kept him in refereeing over the last 15 years. He loves running up and down the field or court and watching the kids grow. Basketball allows him to see the best of both worlds, the girls’ game and the boys’ game with their different styles of play. Those kids who remember him from when they were little help him keep up with the years.

There is one thing he said people don’t understand about officials or refereeing.

“They don’t understand we won’t get every call to everyone’s satisfaction,” he said. “We can’t do it to satisfy. We have to give the kids a fair game. It is about giving them a fair game, a chance to compete and to learn.”

Smith started to walk to a nearby home to meet other officials. He was headed to officiate Enterprise’s playoff game Thursday night.