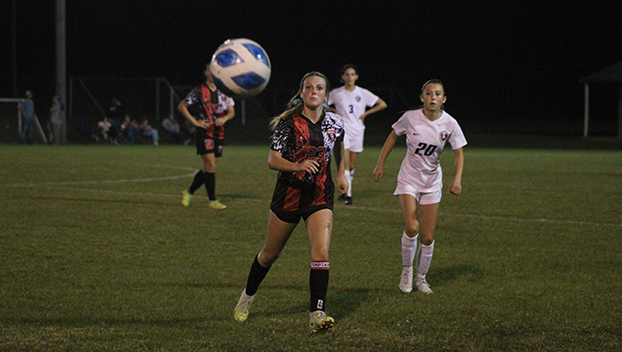 Loyd Star junior Abby Burnette watches a pass fly through the air during a match against Brookhaven. She helped set up one of the goals in a 2-0 win over their rivals Monday night. (Hunter Cloud | The Daily Leader)

BROOKHAVEN — It took a senior stepping up to the moment to open the scoring for Loyd Star Monday night. Mary McCurly scored an early goal to put the Hornets in front of Brookhaven High School.

Late in the second half, Adisyn Holcomb scored the insurance goal as Loyd Star pulled off a big win. McCurley said it was a big win to start off the 2022-2023 season.

Loyd Star finished last year as district champions and aims to make another title run. They are already off to a 3-0 start.

“It meant a lot to get the win. We were able to get the lead early and make it less stressful toward the end. It was a great team effort,” McCurley said. “We have a lot to prove, and we have a lot of doubters. Our goal is to win the district and go further in the playoffs.”

Loyd Star junior Abby Burnette helped set up the insurance goal with a pass to Holcomb, who finished off the chance. The goal sealed Brookhaven’s fate in what was a hard fought game.

Ole Brook nearly equalized in the first half. Senior Ramie Stovall twisted, turned and dribbled her way through the Loyd Star defense and helped create some chances down the wing. It was her effort and the effort of Maryanna Boyte who nearly turned things around near the end of the first half.

Head Coach Dustin Bairfield said he would have liked to score a goal before half. Boyte fired a shot on goal that was deflected behind for a corner. A corner kick was delivered into the box, where a Loyd Star defender cleared it. Boyte held up her hand to appeal for a handball which would have given a penalty, but the ref did not award it.

“I think if we had gotten a penalty, it could have helped our team spirit. I thought it was a good game,” Bairfield said. “We made a few technical errors, and Loyd Star did a very good job. We have won three games prior to this loss, so I think we will move on and learn.”

Brookhaven has a similar goal to Loyd Star, win their district. The Lady Panthers will have to beat out Natchez, West Jones and Florence to claim that title.

Bairfield is in his third season coaching the girls team. He said he has seen a lot of improvement over the last few years. More than anything, he wants the team to be competitive against Florence, the defending state champions.

Loyd Star’s strong start in the game and the season is a credit to one thing, Burnette said.

“We had to play as a team tonight. We never let up and never stopped playing,” she said. “It is not a district match with Brookhaven, but it is one of the biggest rivalries. We feel like we have had a strong start, and we have a lot to prove to everyone.”