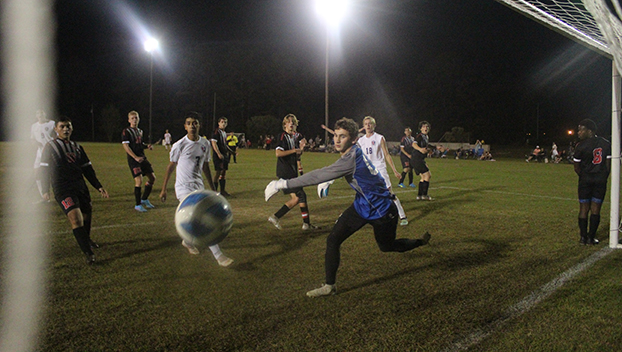 BROOKHAVEN — Ole Brook clinically finished seven goals against Loyd Star Monday night. At least two of those goals came off of set pieces as the Brookhaven High School Panthers executed tactically and technically in a 7-0 win.

Junior Ashton Ogletree scored a hat trick. It is not the first time he has scored three goals in a match, but it has been a while. He opened the scoring early in the game.

It was an absolute screamer of a goal. One you might expect to find in a highlight video of Manchester City’s center midfielder Kevin DeBruyne or PSG’s Neymar Jr. Ogletree said they inspire him on the football pitch.

“It feels great to get a hattrick. I love the feeling of scoring. The first one was a good finish and my favorite goal,” he said. “The ball was passed to me. I body feinted, and then I slammed it at goal. It just curved and went into the top corner.”

He has a solid long shot similar to Neymar and DeBruyne. Ogletree said his second goal, which was from outside the box, was aimed for the bottom post. It is where he finished his shot as the goalkeeper was positioned in a way for him to shoot for that corner.

Ole Brook has worked on its set pieces and corners. Ethen Lopez and Walker Williams are both strong corner-takers. Marham Williams got on the end of one of those crosses to score a goal via a redirection on goal.

He would score a second goal in the second half. Lopez had several chances on goal saved by the Loyd Star keeper. Loyd Star’s keeper saved his penalty with his glove and off of the goal post, and Lopez tapped in the rebound. The referee disallowed the goal to his dismay and despite protests. Lopez finally celebrated a goal late in the second half.

Ogletree got his third goal of the night on a deflection soon afterward and his teammate MT scored the final goal. Ogletree has played soccer since he was in fourth grade, and it has become his passion.

Loyd Star’s goalkeeper Dawson White is growing in his love of the game. Head Coach Jordan Lea said he started playing as a goalie this year for the first time and is a former baseball player. White made about eight or nine saves, which kept his team in the game. Lea said he wishes they would have given him more help on defense. He is just an eighth grader.

“He has bought in. He is a kid who will put the work in. He has practiced hard since the summer and would work by watching YouTube videos,” Lea said. “He is a good kid and strong-headed. Last week, I was proud we had younger players step up and he is one of them.”

Loyd Star started the season 2-0 but got a piece of humble pie Monday night. Lea said he believes the boys will bounce back from the loss and compete for a district title.

“We will have to see who has heart. Sports reveal who has the true spirit,” Lea said. “I would love for us to win the district. I want to see us play together as a team. I want to see us keep fighting. It won’t get you anywhere in life or sports if you quit.”