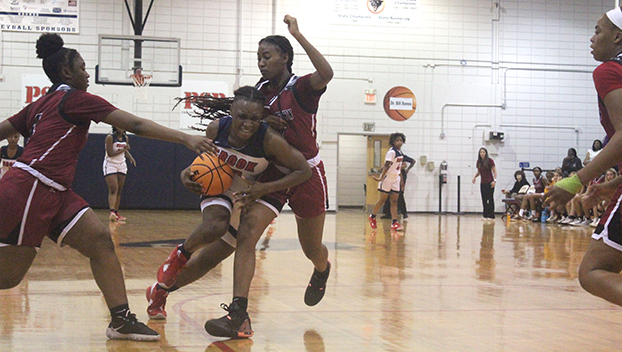 Brookhaven kept the Mavs in Check in the first half. With great hustle and defensive effort, they were neck and neck going into halftime trailing by two points, 29-27. Senior Leah Welcher said the game plan was to play team basketball and hit the inside as much as they could.

However, Germantown came out in the second half on a roll and frustrated the Panthers defensively. After three quarters, the deficit was 13.

“They went on a run and killed our momentum but we have to learn to play through it,” Welcher said. “We just have to keep playing and work through this. A positive is we have a loss. We know what it feels like and we don’t want to taste it again. We will work hard to not have this feeling again.”

Guard Angel Wilkinson said they tried to push the ball into fast break and could have done a better job of transition and getting the ball to the post. The second half they settled in and got down on themselves after Germantown’s run.

Welcher led the team in scoring with 14 points while Wilkinson put up 13 points.

One lesson the team can take from the defeat is they have to slow the game down and make their shots, Wilkinson said. Moving forward they will have to build as a team.

“We have to build it by taking it one play at a time. We have to take notes during the game of our mistakes,” Wilkinson said. “We just have to build faith and confidence in one another. We have to play as team players and believe in everyone.”

Height was a significant factor in the game. Brookhaven is a team made up of mostly guards with the exception of Welcher. Germantown’s Booker is a guard who stands at 6 foot and is a five star recruit who committed to Texas.

Ole Brook did not have much of an answer for her in the second half. Welcher said playing against a nationally ranked recruit was a motivator.

“It made me want to play harder,” Welcher said. “She puts the shoes on the same way I do in the morning. I just have to go out there and play hard.”

Germantown controlled the boys varsity game from the opening tip-off. Ole Brook tried to fight back through most of the game.

The Panther’s intensity was there and they had a fight. Point Guard Jay Ross said they just didn’t execute well.

“We didn’t make our shots and we made turnovers and fouls. We have a lot of work to do to clean up that stuff,” Ross said. “We can’t give up, we are going to have to keep working. We have a lot of players who need some fire. We have to have the right mindset.”

Ole Brook is 1-3 to start the season but they have gotten better each game. Ross said the team goal is to reach the state championship but it will take a lot of work to improve.

Each game they are trying to improve. Steady improvement is his personal goal. There were some positives he could take from the game and the team seemed to rally behind their head coach Charlton Gray’s intensity on the sideline.

“He helps us every day and they always motivate us. He is always fired up. It is the type of person I am. Some of us feed off of the energy,” Ross said. “I want to be the best I can be and do what I’m asked to do. We hit more shots and we got better from the last game and the one before that. I could see our progression.”