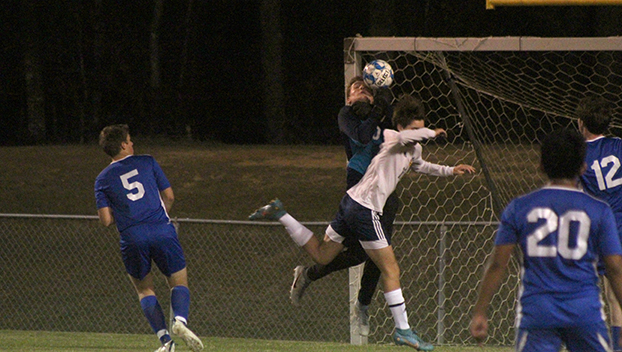 Brookhaven Academy goalkeeper Jaden Lea punches clear a cross on goal. He made nine saves and let one goal past him in regulation. Lea had a great match in what was a hard fought game. BA would lose on penalty kicks 5-3 after tying 1-1 with Madison St. Joe in regulation. (Hunter Cloud | The Daily Leader)

BROOKHAVEN — Goalkeeper Jaden Lea made two saves in the final minute of Brookhaven Academy’s soccer match against Madison St. Joe to keep the game at 1-1 and send it to a penalty shootout. He finished the game with nine saves, but the Cougars fell 5-3 to St. Joe on penalties.

BA missed a penalty, and Lea nearly saved a penalty kick as he got his hands to a shot, but he couldn’t push it away. It was a tough end to a great physical soccer match.

From the start, Brookhaven Academy threatened with an attack on goal and nearly scored in the first minute. Madison St. Joe settled into the game and started to attack the Cougars goal, but BA put in a tenacious effort in the midfield.

“It was intense on both sides. It was a heartfelt game,” Lea said. “The effort was there, and the heart was there, but we could not act upon it.”

Lea said it felt good to make several big saves to keep his team in the game and limit scoring. Brookhaven Academy did not concede a goal until 12 minutes into the second half.

He is a junior and has played goalkeeper since eighth grade. While he was unable to save a penalty against Madison St. Joe, he dove to the correct side four of the five times.

“It was nerve racking on penalties. You just have to toughen up and pick a side,” he said. “I tired that is all you can really do.”

He added Brookhaven Academy is trying to fill the shoes left for them from last year. BA lost last year to Madison St. Joe in the playoffs. Sophomore forward Yojan Hernandez said they hope to go further in the playoffs than last year. Everyone will have to keep working hard.

BA’s work rate in the midfield and defensive third was one of the keys to the game. Defenders put their body on the line, and Enrique Hernandez used his body to shield players and win 50/50 balls.

The match was frenzied from the start. Both sides used speed and physicality to win the ball, and players were not afraid to make a tackle. It was an exciting match to watch. Somehow the refs balanced calling a fair game, allowing the teams to play, and still keeping control of the match.

In the first half, Yojan took an elbow to the ear while a Bruins player was trying his best to shield the ball. The rest of the game Yojan wore a bandage on his ear. It was an example of how physical the game was, he said. He enjoyed the style of the match.

“I like playing physical when the other team is being physical,” he said.

Enrique played a thru ball to Yojan on a break away with about 14 minutes left. Yojan finished the scoring opportunity with a defender pushing into him and the keeper coming off his line.

“It was a pretty good feeling to get that goal. I think we all worked hard tonight,” Yojan said. “We left it all on the field.”