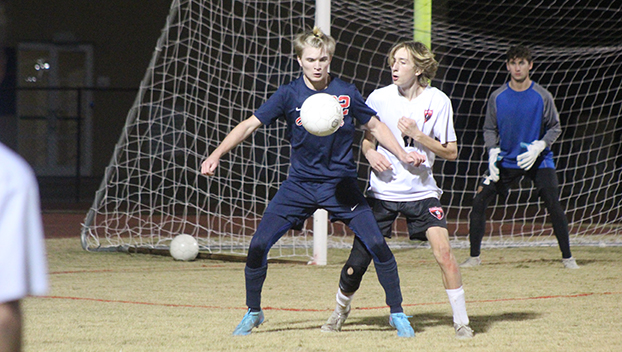 Cole Cruthirds (in navy) scored a hat-trick for Brookhaven High Monday night in 4-2 over Loyd Star. While he looked like Manchester City’s Erling Haaland with his hair up in a bun, Cruthirds said the hair style was due to his hair getting in his eyes.

BROOKHAVEN — The Brookhaven High boys’ soccer team rolled out of their Thanksgiving break with a 4-2 victory over Loyd Star Monday night on King Field. Senior Cole Cruthirds scored a hat trick for Brookhaven High School in the win with three goals.

Junior Walker Williams scored the other goal for Brookhaven High head coach Aaron Ayers. Cruthirds said his second goal of the night was his favorite of the match.

He ran down the field and took a touch around a keeper making a save and leapt clear before tapping the ball home. His hat trick helped secure the win in a close match.

“It feels pretty good to score a hat trick. They are a hard team and we always have a good game with them. A few other guys have scored hat tricks and the coach told me it was my turn,” Cruthirds said. “The first game we played them we played a little bit better than we did tonight. It was still a good game.”

A striker, he has played the position for the majority of his 10-year soccer career. It is a sport he has fallen in love with.

Loyd Star’s Cooper Creel and Carter Holcomb scored a goal each to help their squad. They played better than the first match and even threatened to close the gap in the second half.

Holcomb said he scored his goal by chipping a poor touch over the outstretched arms of Ole Brook’s keeper.

He said he didn’t know he had scored but was glad it went in.

Holcomb started playing soccer when he was young but took a break to play basketball. He made a return last year for LS coach Jordan Lea.

Loyd Star returned from the break with renewed energy as they fought hard in the match.

“We came out with more energy, and we worked harder during practice last week and we gave it everything we had,” Holcomb said. “We just want to win district and maybe make the third round this year.”

Brookhaven replaces a lot of seniors from last season but are a team who can be dangerous. Cruthirds said the team has a strong chemistry and works well together.

They have played soccer together for a while and therefore have a strong bond. Cruthirds should be a factor in their success this season as he is dangerous in the attacking third as a physical presence and uses his awareness well. He was a Daily Leader All-Area selection last year as a junior.

“I try to make my own style. I do my own little thing. I just try to do what I learn and make it my style,” Cruthirds said.

His hair was up in a bit of a bun above his head. It stood out on the field.