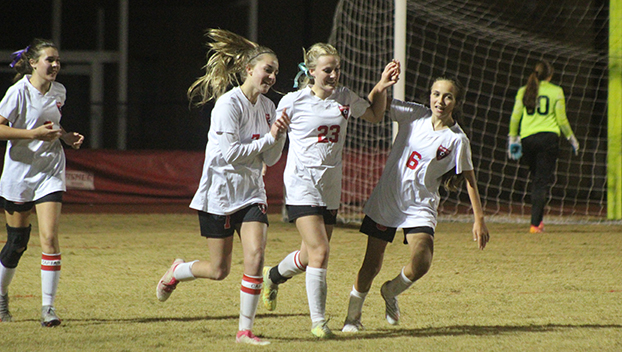 Loyd Star’s Abby Burnette (no. 23) scored the winning goal for the Hornets as they beat Brookhaven to complete a sweep for the first time in program history.

BROOKHAVEN — Loyd Star made history Monday night with a 3-2 win over Brookhaven High in girls’ soccer. Loyd Star head coach Jordan Lea told the team after the game they had swept BHS for the first time in the program’s history.

It was not an easy win by any means. With 20 minutes left in the match, Loyd Star and Brookhaven were tied up at 2-2 with everything to play for. A thru ball played into the attacking third and fumbled by the Panther goalkeeper provided junior Abby Burnette with a golden opportunity.

She took the ball and fired it into a wide-open net to score the go-ahead goal. Her play in midfield in the final moments of the game helped the Hornets to a victory.

“It was relieving to get that goal. It was a pressure game, our defense did really well to keep them from scoring. The goal took the pressure off,” Burnette said. “When the match went to 2-2 it did not affect us. We kept playing our game and never let up. I think we knew deep down we could get it. A win feels amazing since BHS is one of our biggest rivals.”

Mary Claire McCurley and Ady Locke scored goals for Loyd Star in the first half to give them an early lead. Brookhaven High and coach Dustin Bairfield pulled a goal back in the first half with a free kick scored by eighth grader Eliza Smith. It was a beautifully placed shot which curled into the top corner.

Brookhaven returned in the second half by pushing for a second goal and would eventually get it. A ball played into the box by Smith fell to senior Maryanna Boyte. She lashed at the ball with her foot and it took another deflection off of a Hornet player into the back of the net for the equalizer.

“I just saw it at my feet and my first instinct was to shoot it at the goal. One of their players got a touch and I knew it was in,” Boyte said. “We needed it to get in better spirits.”

Ole Brook played a lot better than they did in a 2-0 loss to Loyd Star earlier in the season. Boyte said they spent a lot of time working on their passes, communicated better and are a fully healthy team after battling the flu.

She said some lessons from the loss is the team will need to communicate more, work on their touches, work on finishing goal opportunities and taking more shots.

“It is a hard loss, but it will make us grow as a team and make us better outside of soccer too,” Boyte said.

Brookhaven plays Franklin County on Dec. 1 at 6pm. in their next match. Loyd Star will face West Lincoln on Dec.1 with a 5:30 p.m. kickoff. Burnette is looking forward to playing a region match against West Lincoln as her team continues to grow.

“Our team chemistry has improved, and our quickness has too,” Burnette said. “We are trusting each other and getting the ball around.”