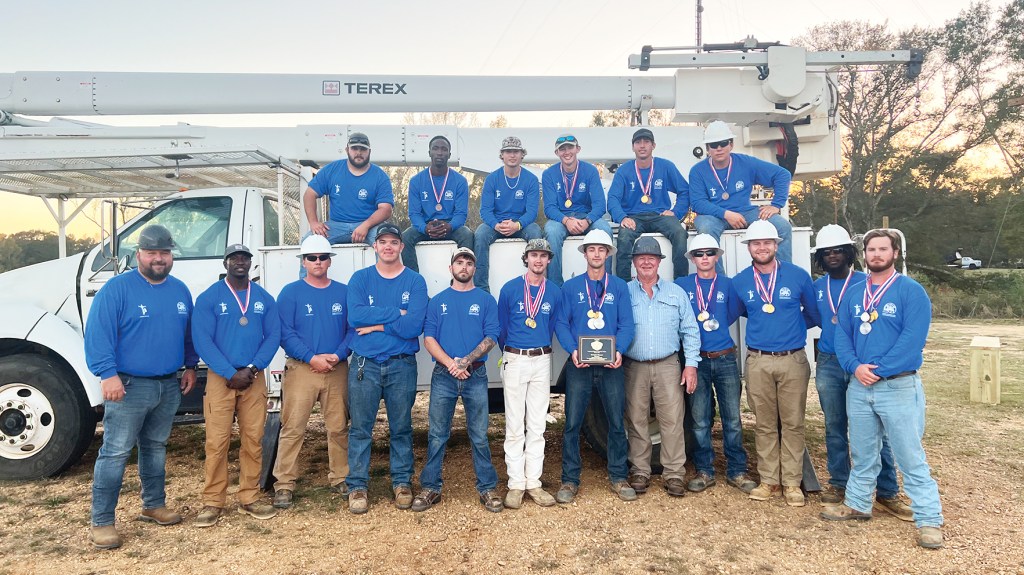 Individual competitions included the pole top rescue challenge and the speed time. A pole top rescue is a required safety skills for linemen. In this individual competition, competitors start on the ground, put on safety gear, climb the pole, safely lower the rescue manikin that represents an injured, unconscious worker to the ground, and then quickly climb down the pole. The timer stops when both feet are returned to the ground. The speed climb competition allows competitors to display their climbing skills and speed by ascending and descending a 40-foot utility pole.

Teams of four participated in the obstacle course, fuse change out, single phase build, and three-phase build competitions. The obstacle climb is a timed event that requires the lineman to climb a utility pole and navigate through obstacles like challenges they might face while on the job. In the fuse change out challenge, competitors are tasked to place a fuse in a switch atop a forty-foot utility pole while standing on the ground and utilizing an extendable hot stick. The single-phase build team competition involves placing and removing two conductors which are located near the top of a utility pole.  A team member would place the conductors while the other teammates served as ground hands.  Upon completion of the build, an assigned teammate climbed the pole to remove the performed assignment. In the three-phase build, two team members start aloft and two other teammates working as ground hands. Once at the top of the pole, four conductors are placed. Then to complete the task, teammates exchange places so that those working the ground ascend the utility pole and tear down the work performed by the prior two teammates.

Each team who placed first through fourth earned points for its school. Copiah-Lincoln Community College teams accumulated the most points and were awarded the Overall Winner title. All events were judged by industry representatives who oversaw and recorded times for each competition. The Co-Lin Lineman’s Rodeo was sponsored by Entergy, Irby Construction, Magnolia Electric Power a Mississippi Cooperative, MDR Construction, Milwaukee Tools, and Southwest Electric.

Co-Lin Team 1 took first place in the single phase rebuild and the obstacle course. They also placed second in the three-phase build. In individual competitions, Jett Calcote took first place in pole top rescue and the speed climb. Jacob Harvey placed third place in the pole top rescue. There was a 15 sec span between first and third. Team members include Jett Calcote of Brookhaven; Jacob Harvey of McComb; Samuel Mabile of Bogue Chitto; and James Pinnix of Flowood.

Co-Lin Team 4 placed fourth out of nine teams in the single-phase build and fuse change out competitions. Team members include Laramie Case of Bogue Chitto; Robert (Chance) Clower of Crystal Springs; Austin McEwen of Brookhaven; and Hunter Taylor of Vicksburg.

Jett Calcote and Nathan Calcote are more than just classmates. These students are also brothers who took sibling rivalry to new heights in the recent Lineman’s Rodeo hosted by Copiah-Lincoln Community College. While their two teams were neck-and-neck in most team competitions, the Calcotes were within seconds of each other in the two individual competitions pole top rescue and speed climb. In particular, the difference between Jett’s first place and Nathan’s second place were a mere 13 hundredths of a second.

Enrollment is open for the next Wesson Campus electrical lineman session which starts January 9, 2023. Additional information about registration is available at our website www.colin.edu/lineman. Those interested in applying are encouraged to contact Co-Lin Workforce Education immediately by calling 601.643.8714.