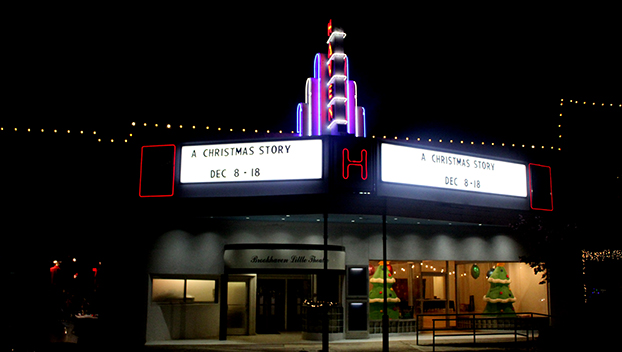 BROOKHAVEN — The countdown to opening night is down to two days. Brookhaven Little Theatre will perform its first showing of “A Christmas Story” on December 8 and will perform many more shows until December 18.

“A Christmas Story” is a musical comedy recommended for people of all ages. It has a run time of two and a half hours with an intermission. The musical is based on the movie “A Christmas Story” which runs on TV for 24 hours straight on Christmas Day every Christmas.

It is set in the 1940s in Hohman, Indiana where 9-year-old Ralphie Parker dreams of getting an Official Red Ryder carbine-action 200-shot Range Model air rifle with the compass in the stock. His dreams are hampered at every turn by teachers, Santa and his parents who tell him he will simply shoot his eye out.

BLT will feature the iconic scenes from the movie such as his friend Flick getting a tongue stuck to the flagpole, his little brother Randy getting dressed up in his snowsuit like an astronaut preparing for a trip to the moon. Bullies Farkus and Dill will be in the musical as will the major Leg Lamp award and other scenes from the classic, BLT communications director Steve McMorris said.

“If you haven’t seen the movie you can still enjoy it. The music is mostly new. The composers of the musical elements are the same composers for The Greatest Showman,” McMorris said. “It is really good music. To me it pulls the story together and offers more of a heart warming feel to the show. Music has an ability to do that.”

He added there are a lot of moving parts to the set design to incorporate all of the different settings in “A Christmas Story”. McMorris said his favorite scene will be at the end of the show.

“The final scene is where the family comes together. It is about family time,” McMorris said. “The whole story is about a boy focusing on what he wants for Christmas. Looking back as an adult,  he sees his family going through times good and bad together.”

Laurie Calhoun plays Ralphie’s mom. She said this is her first show performing with the Brookhaven Little Theatre.

“My family have watched the movie for years on TV. This musical is an interesting and fun take on the movie,” Calhoun said. “It has been a lot of fun and we are all really excited about it.”

Ralphie is played by Andrew Miller. His hair is naturally dark and has been dyed blonde for the role. He is perfectly cast for the spot as he looks just like Ralphie in his glasses and stocking cap. Miller said it is also his first show with the BLT.

“I’m really excited, I have to say. My favorite scene from the movie is where Ralphie fights the bullies. I get to do the scene in this one,” Miller said. “Someone told me I would do good and I tried out for the part. I was actually able to sing a high enough pitch for the role. I’m currently involved in musical theater at school.”

The first two nights of the musical are still available for tickets. People can still purchase tickets for the remaining shows. Tickets are anywhere from $30 to $15 depending on location in the auditorium.

Here are a list of show dates and times:

​Brookhaven Little Theatre is located at 126 W Cherokee St, Brookhaven. There is a concession stand at the theater.