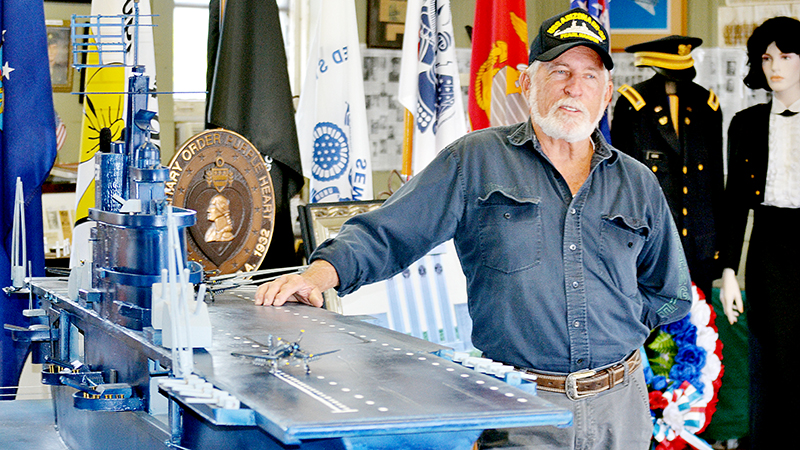 Photo by Donna Campbell/Randall Smith stands with a replica of the USS Princeton he built that is on display at the Military Memorial Museum. Smith has built a memorial for Fireman 1st Class Jim Johnston, of Wesson, who was killed at Pearl Harbor Dec. 7, 1941. Johnston’s remains were finally returned and buried in Wesson Dec. 7, 2016. The memorial will be unveiled at a ceremony at the museum Thursday at 5:30 p.m.

“A date which will live in infamy,” – from Franklin D. Rosevelt’s speech to congress following the attacks onPearl Harbor.

BROOKHAVEN — On December 7, 1941 the Japanese empire attacked the Pearl Harbor naval base in Honolulu, Hawaii in the early morning hours killing 2,335 Americans. Lest we forget the sacrifices of our servicemen on that morning and over the four years which followed.

Hopefully this morning is filled with peace some 81 years later as the day is forecast to start out cloudy and gradually turn to sunny. The high is 79 degrees and the low will be 62 with a south wind blowing around 5 to 10 mph. Wednesday night will be partly cloudy helping keep the warm air and temperatures around.

Did you know there are 14 days until winter arrives? It sure does not feel like it outside. Thursday through Monday has chances of precipitation with the greatest chance being Sunday with a 60 percent chance of rain.

Take a moment to pause and reflect on the significance of December 7 and remember Fireman 1st Class Jim Johnston, of Wesson, who was killed at Pearl Harbor Dec. 7, 1941. Johnston’s remains were finally returned and buried in Wesson Dec. 7, 2016.