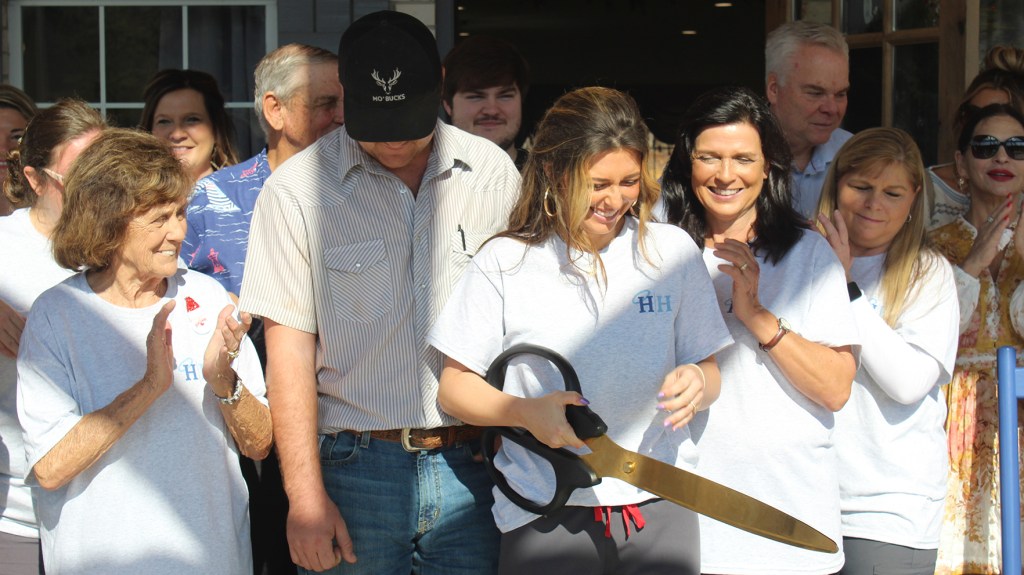 BROOKHAVEN — Golden scissors cut a scarlet ribbon to cheers and laughter outside of Halo Havens Assisted Living Center on Cougar Trail Thursday morning. Owner and Registered Nurse Jaci King said work began on Halo Haven about eight months ago but the story began earlier than that.

After High School, she went to nursing school and worked for about a year in a hospital. Her plan was to have her grandpa Herschel Adams, who has been a builder for 55 years, to build her a healthcare clinic in town.

However, she worked in the hospital and realized the hospital side of healthcare was not what she wanted to do. She felt like all she did was give people medicine and send them back out into the world.

“My cousin Kayla Adams told me about a hospice job opening up. I went to work at hospice care. At 21 it wasn’t something I thought I would do,” King said. “I learned how to do insurance and intakes. Doing anything from admitting them to taking care of them until they died. I loved working with people.”

Her mind shifted to assisted living. Maybe it was the place for her. She asked her parents what they thought about building a place on the land her Papaw had developed years ago on Cougar Trail. They were supportive but she decided to work three more years in hospice.

One night she was thinking about the idea and glanced at a book on her nightstand called Heartwork. It was a book which described her to a “t”.

“I started crying. I felt like it was my answer. God was telling me this was the place for me. I talked to my papaw and he drew up the plans,” King said.

“I think we worked on it for about seven months,” Adams said. “I just turned 80 so getting through with it was my favorite part.”

The Mississippi Department of Health helped them tremendously, King said. Everything started to fall into place. King’s grandmother Jody Adams did the decorating of the home and her mom helps with some of the administrative work.

Halo Havens has started to take in residents. Their first move in a day was Dec. 2, 2022. It is a family owned and operated assisted living center while most centers are franchises, she said.

She encourages people to come and experience the home if they are interested in living there or placing a relative in their care. They have plans in the future to add some petting zoo type animals, a place for dogs to roam and horses with a goldfish pond and a garden.

King said she wants her residents to feel more at home. She has a goal of keeping her why the same over the next five years. The residents are her why.

“I enjoy working with geriatrics because they have so much wisdom. I feel like I was supposed to take care of them,” King said. “I want to see in my eyes what I see now when I look in the mirror. I want to keep my why. I want these people to say they are having the best days of their last days.”

A preacher present for the ribbon cutting led everyone in prayer for the business. He asked God to bless it, the staff and the people who will call it home. King said they have already been blessed with how her staff came together.

She said they were a few weeks away from opening and she was still trying to find someone to work with Tonnicka Smith, Connie Cade and Monica David. Her answered prayer was found in Angela Furr who worked as a sitter and had a patient who had recently passed. King asked her to come work at the center.

“These four ladies are unreal. God sent them to me no doubt,” King said. “I didn’t have a fourth night person and I was just worried. Angela was the last one I needed to finish out the team. It all worked out. God led them to my front door. I didn’t find them. I couldn’t have asked for a better team.”