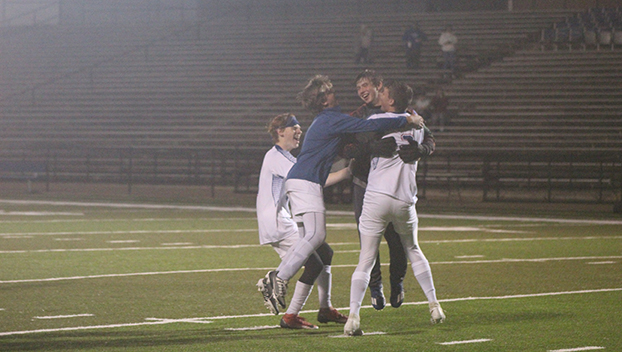 Wesson players celebrate a 2-1 win over Loyd Star Monday night. The Cobras went to penalty kicks for the fourth time this season and it was the fifth time they went to extra time. (Hunter Cloud | The Daily Leader)

WESSON — One hundred minutes could not determine a winner between Loyd Star and Wesson in a district boys soccer match Monday night. Wesson won a coin toss before penalty kicks and elected to kick second which placed all of the pressure on the Cobra shooters.

Goalkeeper Gabe Selman made a save on Loyd Star’s fifth and final kick to win the penalty shootout 2-1 and the game 2-1. Selman moved to his left to make the save and secure the win.

“I was nervous but I got lucky. It was a pk you just pick a side and go to it. I’m glad we won,” Selman said. “I was excited. I’m glad we beat Loyd Star. It helped having experience in a penalty shootout. It seems like the more we go to PKs the better we get. I shaded to the left there because they had already missed one that way. They took the shot and I planted and blocked it.”

Wesson moved to a 4-2 record to match their win total last year and snap a four year drought against the Hornets. The Cobras have gone to extra time in five of their six games, went to four penalty shootouts and won only two of those five games.

Loyd Star opened up the scoring in the first half on a goal scored by Alex Gonzalez and looked to be in control of the game. However, the hornets were unable to get a second goal despite numerous chances in regulation.

Wesson’s Connor Brister scored the equalizer for Wesson on a fastbreak opportunity. He got around the keeper and was able to tap in the ball into an empty net. Selman said he was hoping they would score again to avoid a penalty shootout. Wesson showed a lot of grit to earn the win.

“We are a lot better but we have a bunch of guys who are working together,” Selman said. “They listen. They are gelling and it helps us win games.”