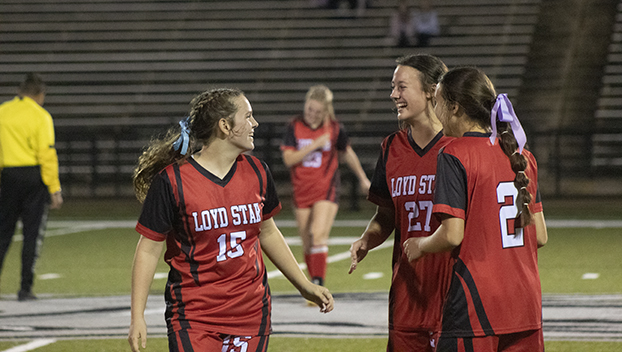 From left, Adi Holcomb, Emma Claire King and Addy Locke celebrate a win over Wesson monday night. It was a district win for the 12-1 Hornets. (Hunter Cloud | The Daily Leader)

WESSON — It took a team effort and a stronger second half for Loyd Star to defeat Wesson 6-0 in a district girls soccer match Monday night. The game was played at Co-Lin due to wet field conditions at the Lincoln County Sportsplex.

Maria Piazza opened the scoring for Loyd Star with a goal in the 10th minute followed by a beautiful curling shot Mary McCurley floated into the top left corner to give Loyd Star a 2-0 lead at half. Head Coach Jordan Lea challenged his team to execute in the second half as they had a number of chances in the first half.

The girls responded by scoring four goals, another beautiful curling shot by McCurley made it 3-0. Adi Holcomb fired a shot from distance and watched as Wesson’s goalkeeper got a paw to it but the ball fell into the goal.

“It feels good to score. I was thinking that shot might not go in and she was going to block it,” Holcomb said. “It was the best goal. I was so excited.”

She would score a fifth goal minutes later by sneaking a ball past a defender and the outstretched arms of goalkeeper Mallory Sanders and celebrated with her teammates. This is Adi’s first season with Loyd Star although she played soccer when she was younger. Her brother Carter Holcomb is on the boys team so she decided to try out. She has enjoyed the season so far.

Emma Claire King capped off the night with a goal. She jumped up and down with glee. The win moved Loyd Star to a 12-1 record. Lea told the team after the game they would return to work on Tuesday and practice hard with a match against Franklin County on the horizon.

“I like how our team is so good together. We have good chemistry,” Holcomb said. “We are close and it makes us work better together. We are both nervous and excited. I’m more excited about this season than nervous. We just work well together. We are worried more about the district schedule than our record.”

It could have been a lot worse for Wesson. They were able to stay in the game until late into the match thanks to outstanding play by their goalkeeper Sanders. Head Coach Amanda Bergeron said Sanders made 15 saves on the night.

Several of those saves were close chances including a volley which could have found the back of the net. Another save had her run from one side of the goal to the other to make a save and she made a few diving saves on low shots.

“She is a junior and this is the first time she has really played in goal. She hung in there for us,” Bergeron said. “She has stepped up and made strong saves. We had about five injuries coming into tonight and have had a tough time but we will continue to push forward. Just like with injuries, we have to ice, rest and hang in there for eachother right now.”