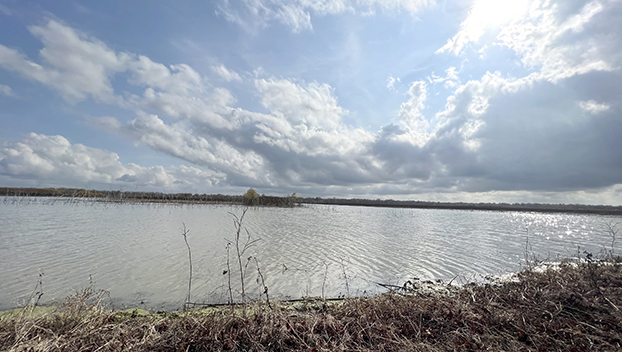 Here is one of the managed waterfowl impoundments at Mahannah Wildlife Management Area near Vicksburg. Birds were flying as teal, gadwall, wood ducks, pintails and mallards were seen as were coots during Saturday’s draw hunt. (Hunter Cloud | The Daily Leader)

Havens and Hardesty said in their report that warm, muggy and often rainy weather lasted the majority of the second week of December. Warm weather affects waterfowl as they have reduced energy needs and thus do not have to move as often or as far for food sources.

“We would not expect to continue to get new southward migrations of ducks with warm temperatures,” Havens said. “Ducks that are here would not need to feed as heavily as they would during cold weather which causes them to loaf in secure areas. This can impact hunting success of course. Winter movements to the north do occur sometimes but we don’t expect there to be a mass migration of ducks leaving Mississippi for more northern locations.”

Fortunately a cold front, which arrived with severe storms Tuesday evening, should shift the weather trends to more favorable waterfowl conditions. Temperatures are forecast to drop to the 30s and ice and snow is expected to blanket the states in the northern part of the Mississippi flyway.

Havens and Hardesty, along with other biologists, are hopeful the cold weather could push these birds further south. A long range forecast also predicts an extremely cold weather event to reach deep into the southeastern states later next week.

Wetland availability is well below normal for this time of year although heavy rainfall in Mississippi from severe storms could help. MDWFP recommends land managers to monitor their water levels and to maintain water level at an optimum foraging depth for ducks. Dabblers need about 12 to 18 inches of water for foraging opportunities.

Harvest trends indicated Northern shoveler, green-winged teal and wood ducks made up a significant portion of hunter harvest. Mallard and pintails were also taken in some areas of the state while Snow, blue, Ross’s, white-fronted (specklebellies) geese numbers have increased in the Mississippi delta.

Havens said they were planning to conduct aerial surveys this week if weather permits. Severe weather could delay their survey but a report will be completed as soon as possible.

Hunters had varying levels of success at some of the WMA’s across the state based on reported harvests. Out of 85 visits to Mahannah WMA, 284 harvests were reported meaning 3.34 birds taken per visit. Mahannah operates on a draw system and is north of Vicksburg.

Sunflower WMA, which is in Issaquena County, had 90 visits with 102 harvests resulting in 1.13 birds per visit. Lake George, just east of Sunflower, had 7 visits with 10 harvests.