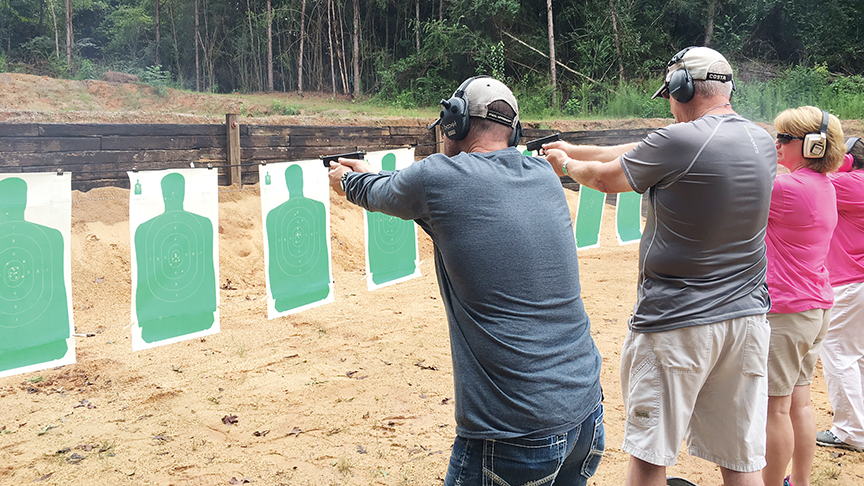 Photo submitted/Students at an enhanced carry firearms class held recently at Primos Hunting take aim at targets. One of the safety rules in the USFS order for Mississippi Forests was to keep visitors safe by requiring any target shooter on forest land to have a solid back stop in addition to other safety regulations.

CLINTON — Forest safety was a topic of concern at the Mississippi Department of Wildlife, Fisheries and Parks (MDWFP) Commission meeting Thursday morning. Public comments from David Smith brought attention to rules on US Forestry Service Land involving safety and hunters.

Smith is a member of the Dog Hunters Association and wanted to know how the United States Forestry Service Mississippi Office could enforce new safety regulations. USFS Mississippi issued FOREST ORDER NO. 08-11-37-23-152 which put in place regulations on the carry and use of weapons in the National Forests.

He felt the rules prohibiting the open carry of shouldered firearms in a mobile vehicle, carrying a loaded firearm on an OHV and forest visitors can not have a loaded firearm within 100 yards of the centerline of any road restricted dog hunters.

Shannon Kelardy, Mississippi Forest Supervisor, said the regulations came from USFS law enforcement in Mississippi. The regulations do not explicitly restrict dog hunting but instead address safety in the national forests. The rules also outlaw the use of alcohol with firearms and implement a rule requiring hunters to wear a fall arrest system. USFS said in a release in November the rules were created to mirror WMA rules and regulations as several National Forests in Mississippi have WMAs in them.

“This was to make the job of our law enforcement easier. They should not have to worry about where they are in the national forests as they would be under the same regulatory framework as WMAs. It should help hunters too,” Kelardy said. “We felt it was important to have the order for safety purposes. We can not solve all of the problems, but it is our responsibility to make things safer.”

MDWFP Commissioner Leonard Bentz was not pleased with the rule and questioned the authority of Kelardy to even make the rule in the first place. She said she could issue the order as it pertained to public safety. Bentz continued to ask questions about why and how the USFS could make an order without public input from hunters.

Kelardy said it is not their procedure to receive public comment on matters of public safety. She added the USFS has a responsibility to respond to questions about public safety on forest lands.

“What about the average hunter who uses forest land to hunt on. A federal bureaucrat can make a rule without any input from the average Mississippi hunter, how can you do that,” Bentz said. “This is typical bureaucracy. I can’t understand how a federal entity can make a rule on an average everyday hunter without input. If you are worried about safety, get rid of hunting. That is where people get hurt, and I am not for that.”

Bentz continued by saying the USFS was trying to insult dog hunters who are already a “dying breed,” and the rules were giving “animal rights activists and everyone who assaults us another hand up.”

He said he understood people might be frustrated with dog hunters because dogs can run on private land, and it was an issue he faced from time to time.

“For a federal bureaucrat to make a rule which would affect the average hunter is ludicrous. I hope our department was not encouraging of that,” Bentz said. “I appreciate our partnership with the USFS. I am passionate about the Mississippi hunter. We are constantly being assaulted by organizations who do not appreciate our values.”

Commissioner William Mounger II spoke out in support of the safety measures. He said he respects the passion of Bentz and Smith, but he knows landowners and property owners who feel the new rules are good for safety. He also addressed Smith’s concern about dog hunting being threatened by the state.

“I love dog hunting. It is a lot of fun. I have done it in Alabama and Mississippi. No one here wants to do away with it,” Mounger said. “We do not have authority over it though. The state legislature does. We do not have an agenda against it. To offset what Bentz said, I do not see anything wrong with these rules. I do not want someone to shoot off of a public road because it is a safety hazard.”

Col. Jerry Carter, MDWFP Chief of Law Enforcement, gave some statistics later in the meeting about citations from November. He said 1,299 citations were issued statewide in November with 160 citations issued for no license, 143 citations for individuals hunting from a public road, 66 for trespassing and 43 for not wearing hunters orange.

“There might have been a third party involved, and we hope to catch them,” Carter said.