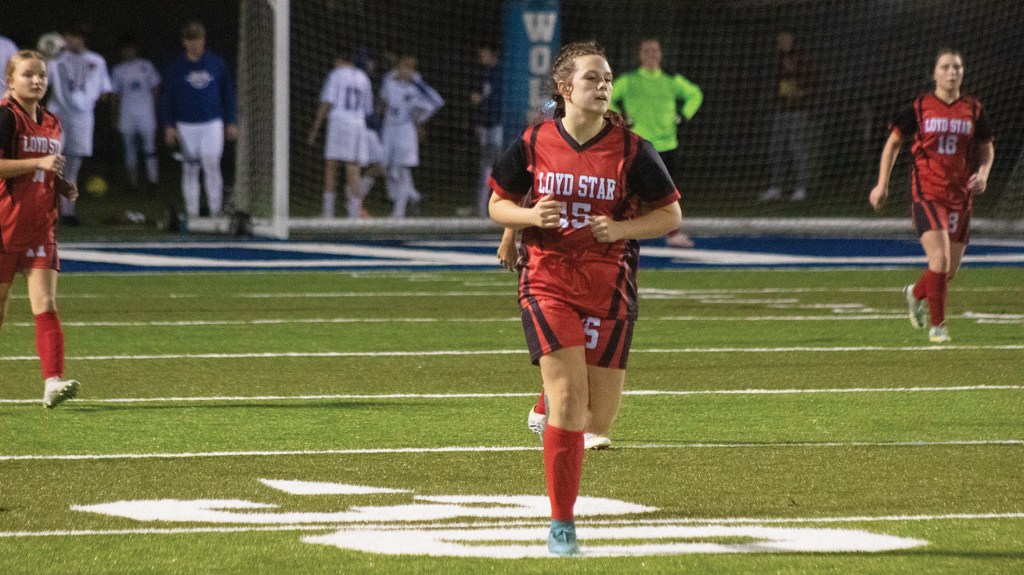 PHOTO BY HUNTER CLOUD Adi Holcomb scored two goals in a 6-0 win over Wesson Monday night. One of her shots was a high looping ball which was nearly saved by the Wesson goalkeeper.

Rain washed out area soccer matches scheduled for Thursday (West Lincoln vs. Raymond, Brookhaven at Magee) for multiple schools Here’s a look at what matches have been played this week despite the weather.

In a pair of Class I-Region 7 matches played in Wesson on Monday, the Loyd Star girls moved to 12-1 with a big win over the home team while the Wesson boys’ team took a victory in a penalty kick shootout.

The match had originally been scheduled as a Loyd Star home match at the Hansel King Sports Complex but was moved to the artificial turf of Stone Stadium due to rain.

Maria Piazza opened the scoring for Loyd Star with a goal in the 10th minute and was followed by a beautiful curling shot from Mary Claire McCurley that floated into the top left corner to give Loyd Star a 2-0 lead at half.

a number of chances in the first half that came up empty. His team responded by scoring four goals in the second half.

Another beautiful curling shot by McCurley made it 3-0 and Adi Holcomb fired a shot from distance and watched as Wesson’s goalkeeper got a paw to it but the ball fell into the goal.

“It feels good to score. I was thinking that shot might not go in and she was going to block it,”

Holcomb said. “It was the best goal. I was so excited.”

outstretched arms of Wesson goalkeeper Mallory Sanders and celebrated with her teammates.

This is Holcomb’s first season with Loyd Star although she played soccer when she was younger. Her brother Carter Holcomb is on the boys’ team, so she decided to try out.
Emma Claire King capped off the night with a goal. She jumped up and down with glee. The win moved Loyd Star to a 12-1 record.

It could have been a lot worse for Wesson. They were able to stay in the game until late into the

match thanks to outstanding play by their goalkeeper Sanders. Head coach Amanda Bergeron

said Sanders made 15 saves on the night.

of the net. Another save had her run from one side of the goal to the other to make a stop and

she made a few diving saves on low shots.

“She is a junior and this is the first time she has really played in goal. She hung in there for us,”

Bergeron said. “She has stepped up and made strong saves. We had about five injuries coming

into tonight and have had a tough time but we will continue to push forward. Just like with

injuries, we have to ice, rest and hang in there for each other right now.”

In the boys’ match, one hundred minutes could not determine a winner, but a penalty shootout did.

pressure on the Cobra shooters.

Goalkeeper Gabe Selman made a save on Loyd Star’s fifth and final kick to win the penalty shootout 2-1.

Selman moved to his left to make the save and secure the win.

Selman said. “I was excited. I’m glad we beat Loyd Star. It helped having experience in a

penalty shootout. It seems like the more we go to PKs, the better we get. I shaded to the left

there because they had already missed one that way. They took the shot and I planted and

to be in control of the game. However, the Hornets were unable to get a second goal despite

Wesson’s Connor Brister scored the equalizer for Wesson on a counter opportunity. He got

around the keeper and was able to tap in the ball into an empty net.

Selman said he was hoping they would score again to avoid a penalty shootout. Wesson showed a lot of grit to earn the win for coach Hank Jordan.

“We are a lot better and we have a bunch of guys who are working together,” Selman said.

“They listen. They are gelling and it helps us win games.”

On Thursday, the Wesson girls dropped a 3-2 defeat to Bogue Chitto while the Wesson boys’ team got another win in penalty kicks, this time 2-1 over BC after the match was tied 2-2 in regulation.