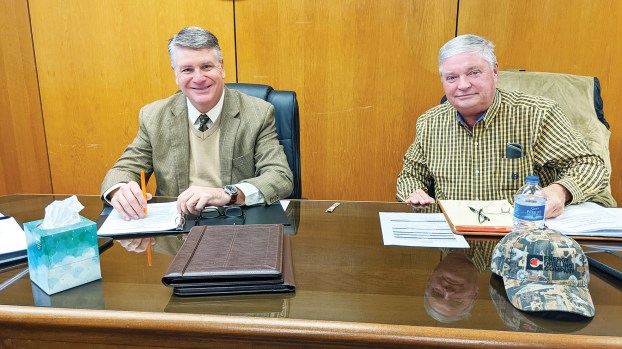 PHOTO BY ANGELA CUTRER From left, F. Gregory Malta has been hired as the new attorney for the Lincoln County Board of Supervisors. He is pictured with District 4 Supervisors Eddie Brown. 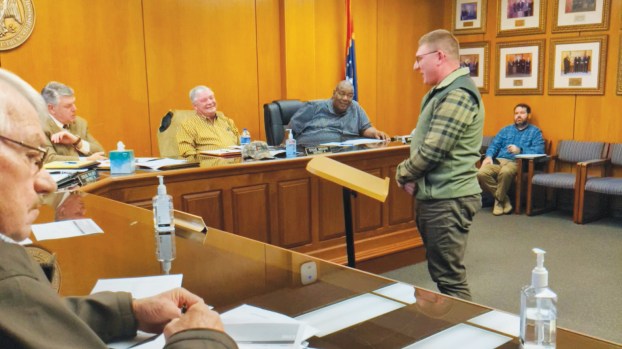 During its last regular meeting of the year, the Lincoln County Board of Supervisors welcomed its new county attorney, F. Gregory Malta, who will take his seat Jan. 3, 2023, and a new Lincoln County Civic Center facility manager, Chaston Bullock of Loyd Star.

The Civic Center’s new manager was introduced to the board by Dr. William Kimble, the commission’s current chair.

“This gentleman has 28 years in the military, he’s a firefighter and he has the skills to complement the duties of the manager,” Kimble said of Bullock, who will also take on his new duties Jan. 3. “We feel he’s the right person to be the face of the center — whether on a ball field or Walmart. We are excited for what the future holds for us.”

In other news, the board heard from Hayes Lambert of Atlas about the database issues concerning the tax office that had been the subject of discussion of quite a few of the supervisors’ meetings. In October, the board heard from David Rankin, a contractor for the office of Lincoln County Tax Collector/Assessor Blake Pickering’s office, about “hundreds of problem stacks” of issues with missing deeds, deeds not recorded, data quality problems (numbers not matching other lists), among other troubles. Pickering explained afterward how his office was working with others to clean up the database of long-standing errors.

Lambert said his office was working hand-in-hand with Pickering’s office to clear up the problem stacks, which come from wrong information keyed in and homeowners producing titles they’ve done themselves or paid someone to do. He promised to come before the board once the numbers are in to let them know what the numbers stand at that time.

County Administrator Daniel Calcote told the board that the 2023 Fiscal Year is 16.66 percent complete and the county has received 10.5 percent of its budgeted receipts. “The bulk of county revenues will be received in January through March, so it is typical for revenues to lag behind at this time of the year,” he said.

The board approved a letter from the Department of Revenue approving the recapitulations for the county, inter-fund transfers related to the AITX project and senate bill projects, and new Justice Court Clerk Christy Sheppard attending training.