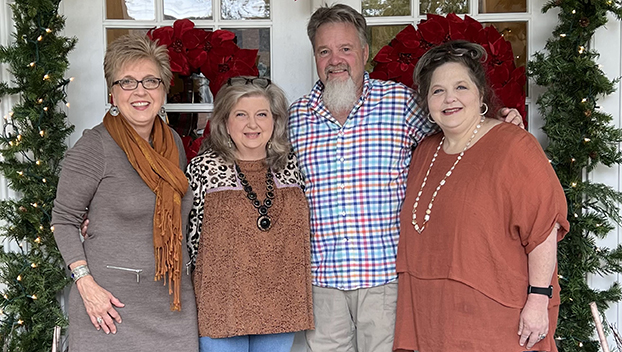 Lisa Wallace Pittman was outside her home on the corner of W Minnesota Avenue and South Church Street close to where The Dart landed Friday Morning. Here she is with her siblings on Thanksgiving. From left, Sheila Wallace Kassner, Lisa Wallace Pittman, Mutt Wallace and Pam Wallace McCarty stand outside the historic Storm family home. (Submitted Photo)

BROOKHAVEN — A Christmas tree and mannequins fill a bay window, nutcrackers, wreaths and lights adorn the home on the corner of South Church Street and West Minnesota Avenue close to where The Dart landed Friday morning. Lisa Wallace Pittman stood outside the home with a red Christmas oven mitt on her hands and asked “Want to go inside.”

She opened the door to a foyer connected by a main hall to the back of the home. A christmas tree stood about 12 feet tall in the middle of this main hall. To the right is a living room area where the Christmas tree and several Christmas decorations fill a window.

On the left, is a dining room which has been decorated with the theme of nutcrackers. Pittman said she has collected about 50 nutcrackers including the two giant nutcrackers which stand as sentries on the front steps. Her sister Pam Wallace McCarty said each room has its own theme. The kitchen is decorated with a gingerbread theme, the study is Santa Claus, and the den is their family Christmas tree in the middle of the home.

“Christmas is our favorite time of the year so we started decorating before halloween. We knew it would take a long time,” McCarty said. “This was my sister’s idea to turn the bay window area into a fun thing. When you make the turn at the corner it would look like a bunch of decorations. We enjoy seeing the kids walk by from school. We thought they needed something to look at and what better way than a display window.”

Pittman said their mother is the reason why they decorate so much for Christmas and any other holiday. She was a kindergarten teacher at First Baptist Church in Brookhaven and would go over the top with decorations. Her mom’s philosophy was there was never enough decorations as nine christmas trees fill the home, those are not counting several trees shorter than 3 feet.

McCarty said it has been fascinating to see her and her sister’s children grow up because they have started over decorating their homes too. They are passing along the tradition from their mom.

The home at the corner of S Church Street and West Minnesota Avenue has a lot of stories to tell. It was built by the 1860s although Pittman said there is a possibility the home was built as early as the 1830s. In her youth, it was known as the Piano House because a grand piano filled the space in the bay window but she now calls it Storm Manor after John Storm and the family who first lived in it.

John Storm built the home and was one of the early residents of present day Brookhaven. He was born in 1812 in France and moved to Mississippi with his father after his mom died. McCarty pulled out a picture she found of John and held it in her hands. They plan to have it framed and placed in the Foyer to greet whoever enters the home.

Storm built the Storm Building in downtown Brookhaven to house his business enterprises. Their land butted up with the Butterfield mansion and was sold off piece by piece. Storm graves were buried behind the home until the land was sold and the family was transferred to their final resting place at Rose Hill Cemetery, McCarty said.

Pittman said they are still trying to document and find all the history they can on the Storm family and about the home they once had. Much of the house is original although it has received updates over the years. Old wooden floors allow cool air to seep in and the occasional wooden beam can be seen in the ceiling. She said there are eight fireplaces in the house and only one is functional now.

The den area of the home in the main hall is what was known as a dog trot. A dog trot is an open air courtyard with rooms on each side facing the center, Pittman said.

Storm had three daughters named Dale, Bonnie and Mary who all grew up to become old maids. They were born in the home, lived their entire lives in the home and laid in rest before being buried at the home. Pittman said it has been fascinating to learn about and she feels a connection to those three sisters as she has two other sisters.

“We all grew up loving this house but the Storm history is something we have learned since moving. This house has so much history,” Pittman said. “We are still researching and finding out more. We just feel like it was meant to be.”

She added they hope any descendants of the Storm family might have family history stories to tell. They have become invested in the family history and hope to keep a “forgotten family” story alive in Brookhaven. The Storm’s plot at Rose Hill needs some care, McCarty said.

Home for the holidays

Speaking of family, Christmas is nearly here and they are expecting about 15 guests to arrive in their home. Gifts are being wrapped and they started making candy for the holidays about four weeks ago. Pittman said tomorrow they will resume baking in preparation for Christmas.

She said no matter how old her son, nieces and nephews get they always want to come home for Christmas. Brookhaven is her home as she left after college with her husband and moved to Washington D.C. for five years before moving to Hattiesburg.

One of her favorite decorations on display is a Fontanini nativity set her late husband gave her. He died in 2001 and Pittman made the decision to move back to Brookhaven in about 2007 to be closer to McCarty. Her other sister Sheila Wallace Kassner decided to purchase them a home so they could live in a house together. They moved in this August.

It will be the first Christmas they share in the home for the holidays. Pittman said God put her and McCarty in the house together and she feels very blessed. Her brother Mutt Wallace was home for Thanksgiving. Their dogs Tammy Faye, Riley Kate and Honey Bear fill the home with love.

They plan to play games on Christmas Eve like she did when she was a kid and on Christmas morning they will read the Christmas story.

“We are carrying on our tradition as mothers now. My parents would be so happy and grateful to know their children are still taking care of each other 35 years after their death,” Pittman said. “We take care of each other and we are all close.”