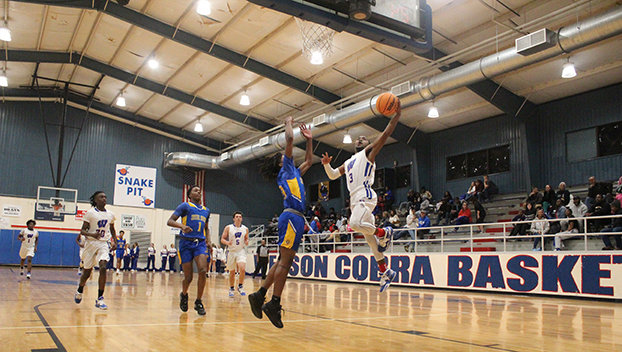 Christian Davis goes up for a layup. He scored 22 points and accounted for half of Wesson's 44 points in a 70-44 loss Monday night. (Hunter Cloud \ The Daily Leader)

BROOKHAVEN — Wesson Cobras lost both varsity games to Crystal Springs on a cold and dreary Monday night. Christmas Break is on the horizon and the Cobras will have some room to grow when they return to basketball action after Christmas.

Wesson lost its girls game 41-38 and the boys game 70-44. Crystal Springs took a late lead in the girls game and managed to hang on to earn the win. Me’Leyjah Lyons led her team in scoring in the loss with 19 points.

She almost willed the team to victory, draining a three pointer late in the game to cut the deficit to 1 and giving her side hope with a forced jump ball. It just was not enough to scratch out a win before Christmas.

“We stopped shooting from the outside and stopped protecting the basket in the second half. We were just too confident going back out on the court,” Lyons said. “At the half I was impressed with us. It was a good competition (score was 21-20.) I made that three pointer and it felt good. I was shocked. I had faith in the shot but it just did not feel real.”

She said she knows the team can shoot better from the perimeter and can play better. They will have to bow up and get stronger over the Christmas break. Weight training might be a way for the team to improve, she said.

Wesson’s goal is to be number one in the district, she said. They had chances to score points in the final minute and perhaps tie the game but could not get shots to fall. While Lyons led the team in scoring with 19 points, her teammate Saniya Brice was second with eight points and Brianna Dixon had six points.

Crystal Springs dominated the boys game in scoring but there were glimmers of hope for the Cobras. They played hard and tried to find a way back into the game with a 22 point night from Christian Davis. It just was not enough to bridge the gap as the Bearcats won 70-44.

Davis said one of the reasons he had such a good night was the Bearcats were not prepared for him. He did not play in their first game against Crystal Springs.

“I had chances to get open looks tonight and attack the basket because I didn’t play that first game,” Davis said. “We had a lack of focus going into this game as a team though. You have to be focused. I think we will come back from this and regroup. It is all about your mindset. You have to be willing to work it off and move on to the next game.”

Wesson is still trying to get its football players in basketball shape after they made a deep run into the playoffs this fall. Davis said they are also growing as a team as bench players are having to step up and make contributions with injuries to starters.

Grayson Coates contributed to the effort with 13 points for the Cobras. Aiden Brice and Cole Short had six points each.

“I have never won a ring here. I am trying to get past the second and third rounds and win this thing,” Davis said. “I’m a senior. I grew up here. All of my family went to school here. One of my family members played here and went to college. I wanted to play my heart out this year.”