The Dart: Griffin enjoys golfing with buddy he met through nursing 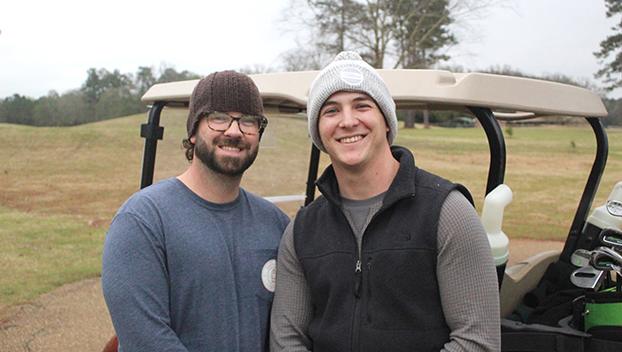 From left, Leighton Tate and Connor Griffin take a break between No. 17 and No. 18 at the Brookhaven Country Club. (Hunter Cloud | The Daily Leader)

BROOKHAVEN — Connor Griffin and Leighton Tate walked off the No. 17 green at Brookhaven Country Club close to where The Dart landed Thursday afternoon. They were two of four golfers playing in the mid 40s and cloudy sky conditions.

Tate said they try to play golf together once a week. He added most people with addictions do drugs, drink alcohol or smoke tobacco but their addiction is the game of golf. Griffin said he started playing golf about a year and a half ago.

Golf is a game which has brought the two closer together as good friends. They first met at UMMC in Jackson through nursing and now work as travel nurses. Griffin said golf was one of the ways they stayed connected when Tate first left UMMC before they started working together again three months ago.

“I have fallen in love with golf. It is just something you can do all of the time. We have played in colder weather than this but this is pretty cold,” Griffin said. “Right now we are battling it out. The loser has to buy the winner a sleeve of balls from the pro-shop. I’m on the verge of a win and it has been my best round of golf so far. Tate has yet to buy me a sleeve of golf balls.”

He said he played football and soccer in high school but had not played golf until he met Tate. Thursday’s round was going strong with one hole left. He was on pace to beat 90 strokes for 18 holes something only 30 percent of golfers can achieve. Tate reminded him he could catch up if Griffin’s shots ended up in the water hazard on No. 18.

A newlywed, Griffin said he felt pretty lucky his wife lets him play golf still. They were wed six weeks ago and bought a home in Brookhaven. His wife is a teacher at Wesson and is a native of Crystal Springs.

Griffin spends much of his week working as a travel nurse alongside Tate in Louisiana. They work with a mental health hospital. Griffin said his dad suggested nursing and he has learned there is a lot more to the role as he had thought.

“I think you have to be called to do it,” he said.

God’s plans for Griffin brought him into the nursing profession. As a kid, he spent a lot of time in the hospital and thought he would never return if he could. He was diagnosed with a cancerous tumor in his lower back which could have left him unable to walk.

“I never thought I would become a nurse and I have been able to see it come full circle,” Griffin said. “I wasn’t supposed to be able to walk after surgery. There was a serious risk of me becoming wheelchair bound. Luckily, the Lord defied the odds with me. Within a few hours of surgery I was able to get up and walk. I’m grateful for St. Jude. I graduated in 2019 from St. Jude.”