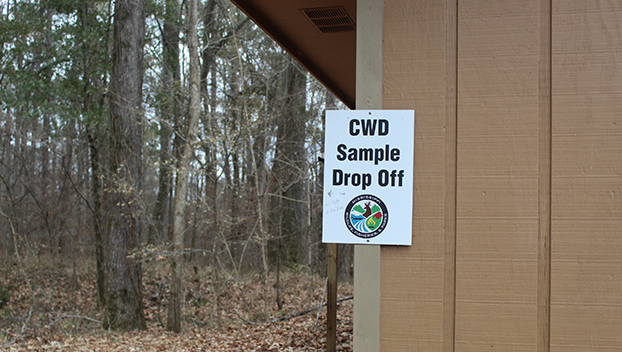 Hunters can submit Chronic Wasting Disease samples at drop off coolers like this one at Natchez State Park. Instructions on how to leave the sample are on the freezer door. A list of drop-off locations can be found on the MDWFP website under CWD. Mississippi is up to 174 CWD positives since first detection in 2018. (Hunter Cloud | The Natchez Democrat)

JACKSON — Mississippi Department of Wildlife, Fisheries and Parks Commission is working to possibly reschedule a Chronic Wasting Disease educational session before their monthly meeting, MDWFP Deputy Director Larry Pugh said. He said itineraries changed before the December meeting which led to a change in educational session topics following the rescinding of the Claiborne County supplemental feed ban in November’s meeting.

Research scientists from the Arkansas Game and Fish Commission were set to present a one hour discussion on the complex disease. CWD is 100 percent fatal in deer and is caused by an infectious misfolded protein. However, the itinerary for the day did not allow for an hour long discussion as the session was shortened to 30 minutes.

“We believe Chronic Wasting Disease warrants a full 1-hour discussion and I didn’t want our guests to travel from Arkansas for a 30 minute session,” Pugh said.

He added the disease is a complex issue and their staff have worked hard since 2018 to formulate a CWD management plan. They created the best plan to continue monitoring for CWD done by working closely with other CWD positive states, the MDWFP commission and state partners, he said.

Right now, MDWFP is reviewing the upcoming commission meeting schedule and the schedule of Arkansas guests to determine the best meeting location to discuss CWD. January’s tentative agenda for the commission meeting does not include an educational session but this could change when the official agenda is released three to five days before the meeting on January 25, 2023 at 1p.m.

CWD came up in a public comment at the December meeting when Ed Penny asked the commission to take action and reverse their decision to rescind the supplemental feed ban in Claiborne County.

MSU Deer Lab research projects have shown bucks cross the river. Bucks are mobile and more likely to spread the disease.. Buck #140 was the most popular buck from this movement study due to it crossing the river four times in the same area. Its tracking collar fell off this fall before the buck was harvested by a hunter at Phil Bryant Wildlife Management Area in late December.

Two individuals expressed concerns about the ban and said they had been negatively impacted at the November meeting. Commissioner Leonard Bentz made a motion to use the Mississippi River as a demarcation for placing a county in a CWD zone. If a positive was detected on the left side of the river it wouldn’t put the rest of the county in but if it was on the right side the rest of the county would be in.

The motion was passed with William Mounger the only commissioner voting no. Pugh said the commission has to examine multiple sides to the issue such as biological, economical and public input.

“The Mississippi River was deemed as a significant barrier that may limit back and forth deer movement, further public input was negative to the supplemental feeding ban based on a CWD positive deer not in Mississippi,” Pugh said. “Additional testing may reveal CWD in present or in other counties bordering the Mississippi River. A supplemental feeding ban would then be enacted per the plan. This decision was deemed appropriate to find a balance between the aforementioned considerations.”

Louisiana detected its second suspect positive for CWD in Tensas Parish Thursday. They are sending the sample to the National Veterinary Services Laboratory in Ames, Iowa for confirmatory testing.

Mississippi, which had first detection in 2018, has seen 40 new positives this year with 38 of them coming from north Mississippi. Benton and Marshall Counties are the primary hotspots of CWD. In four years, 174 deer have tested positive for CWD in Mississippi.

Hunters are reminded to continue submitting harvested samples for surveillance. A list of drop off locations can be found on the MDWFP website.