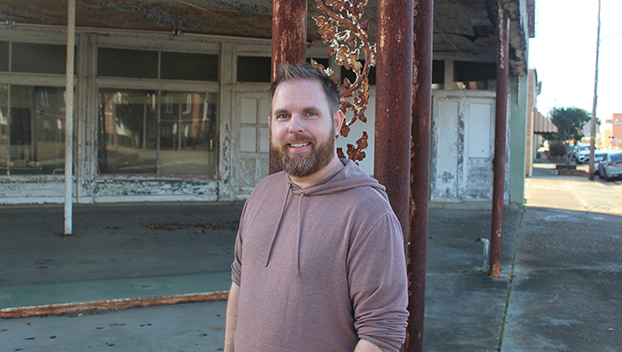 Russ Heritage outside of the Kees Motor Company on Cherokee Street close to where The Dart landed Wednesday afternoon. He has lived in Brookhaven since 2019. (Hunter Cloud | The Daily Leader)

BROOKHAVEN — It was a bright, sunny and warm day in Brookhaven and created perfect lighting for someone to capture buildings in photography Wednesday. Russ Heritage stopped in the middle of Cherokee Street to snap a photo of the old Kees Motor Company building close to where The Dart landed.

He was out taking pictures of buildings around Brookhaven and had recently made a stop at the Coffee Pot on First Street. Heritage is somewhat new to the area having moved here in 2019 and when COVID-19 shutting things down. This year he and his wife are trying to get more involved in the community. His Canon EOS 1N is aiding his hobby of capturing the town.

“I have just now started working on shooting pictures of the town. I enjoy the older buildings and trying to figure out which stories are being told there and what they mean for the city now,” he said. “I like to use the film camera because in the process of film you have to take your time with it so the final results come out the way you want them too. It also takes out the editing after the fact which comes with digital photography. It also feels different than work, it is more of a hobby to me.”

He grew up as an Air Force Brat living in Florida and Texas before his family moved to Madison where he lived for 15 years. According to his blog, he worked as a copywriter for a fortune 100 company but has since pursued other passions. One of them being photography, a medium he started out in by taking up portraiture in Milwaukee while his wife did her medical residency.

They moved to Brookhaven when she started working as an OBGYN at King’s Daughter in Brookhaven. He has continued doing portrait photography here. He also writes non-fiction blog posts which usually focus on mental health, productivity and spirituality and can be found at hertiagewords.com

“We moved here for her work and I have been trying to find a voice for myself,” he said. “I have come to appreciate the beauty of smaller towns and telling the story of the places that are close to me. I have always been a creative type.”

Photography eats up a lot of his free time as does his four-year old cockapoo named Milo.

After earning a degree in English and writing at Mississippi College, he got his first corporate job where he developed a love of coffee. At first, it was to stay awake and gain a boost of energy but eventually turned into a love for the flavor.

His wife bought him an espresso machine which really inspired him to find new ways to make coffee. While he is not a coffee snob, he said he can be a little picky about the type of beans and milk used.

Heritage said he met his wife at Mississippi College in an Old Testament class. He added he used to think it was silly for someone to find their love interest in college and then it happened to him. Twelve years later, they are still going strong. His advice for any newly weds out there is simple.

“Spend as much quality time with each other as you can,” Heritage said. “Be quick to forgive.”