Hernandez scores twice to give Cougars first win of 2023 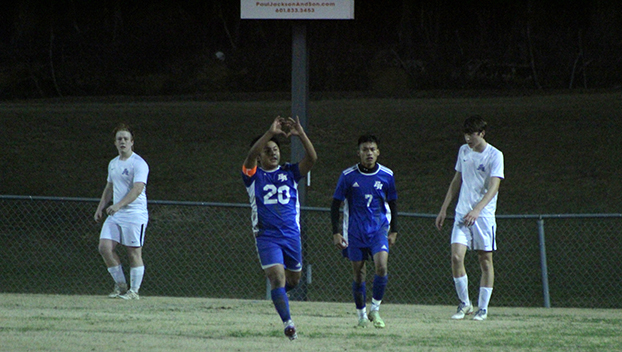 Enrique Hernandez makes a heart with his hands after scoring a goal for BA in their 3-2 win over St. Aloysius Thursday night. He scored two goals while his cousin Yojan scored in the first half. (Hunter Cloud | The Daily Leader)

BROOKHAVEN  — Enrique Hernandez was fouled late in Brookhaven Academy’s match against St. Aloysius Thursday night. The referee called a foul as the Flashes defender bumped Hernandez with his shoulder and pointed to the penalty spot.

He calmly stepped up to the spot and sent it past the keeper to give Brookhaven Academy a 3-2 win and complete a 2-1 comeback. It was the first game the Cougars played in four weeks following their Christmas break.

“I’m glad we were able to win. We were playing hard,” Hernandez said. “I felt I was going to score when I walked up to take the penalty. I was confident. It is just natural for me.”

He scored the equalizer with about 25 minutes left to go in the second half after weaving through defenders. Celebrating, he threw his hands up to form the shape of a heart with his cousin Yojan Hernandez congratulating him.

Yojan scored the first goal of the night on a penalty kick which was saved by St. Aloysius’s goalkeeper. He followed the rebound up and put it in the back of the net. Flashes scored a goal about 10 minutes later on a low free kick into the BA box.

With about three minutes to go in the half, St. Al scored their go ahead goal on a short range chance. BA was looking for a spark at halftime after the Flashes created an abundance of pressure and chances in their attacking third.

“They were pretty fast and they had a good touch tonight. It was tough. You have to play smart and know what they want to do,” Enrique said. “We changed some things at halftime and head coach Alex Brown told us to try our best. He told us to play smart and be physical and strong.”

It must have worked because Brookhaven Academy responded with two second half goals to win the match. St. Aloysius had chances in the final minutes of the game but could not convert on a series of corner kicks.

Brookhaven Academy plays at Adams County Christian School next Monday with kickoff at 5:30 p.m. Enrique should be healthy for the game after he went down with a cramp late in the second half. He told the athletic trainer he was cramping from all the running he was doing.

Over the offseason, Enrique played in an adult soccer league in Jackson and trained in a 30 pound weighted vest to prepare for the season. Those efforts came in handy as the match drug on.

“Those days with the weighted vest helped a little bit. It was hard because we hadn’t practiced much over the break. We lost our touch and conditioning, it was hard,” he said. “Matt Newman, Cooper Strickland and Yojan played hard. The whole team played well. They helped us out a lot.”