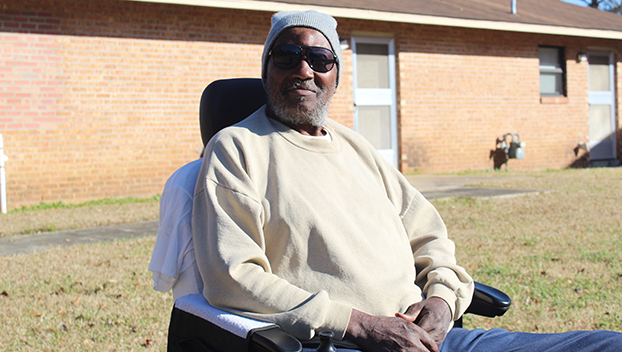 BROOKHAVEN — A man in a gray stocking cap, khaki sweater and blue pants waved to cars passing by as he sat in his mobility scooter. Melvin Moore has a prime location to watch drivers pass by and wave to people on the corner of Brookman Drive and MS 550 close to where The Dart landed Friday morning.

He had a ring with a cross on his left ring finger which he had bought from a magazine. Wisdom he said was something found in the bible as it tells people how to live righteously but there are people who do not hear it. It is a message he heard growing up in church.

Sunglasses shielded his eyes from rays of sunlight. Not a cloud was in the sky on the crisp Friday morning. Lines from the mobile chair and a beaten down path showed his shortcut to his sunning spot on the sidewalk. Earlier this week he had gotten stuck in the mud but was helped out by a man, he said

“I don’t have many windows inside except the one in the kitchen. I come out here after I watch the TV and the news,” he said. “I sit in the sun and watch people drive by. I talk to some people and I will wave to them too. It is up to them if they want to wave back.”

He reached down to check his phone and see what time it was. Gunsmoke was on his mind as he explained he enjoyed all of the characters. “They all do their part,” he quipped. It is a western series he has watched ever since he could watch TV.

Born in Springfield, in South Lincoln County, he grew up in Bogue Chitto. He played basketball for the Bobcats. Life in the country was something he enjoyed. His mornings as a kid were filled with milking the cows, he said.

Two of his siblings live in Brookhaven now and his other two siblings live down in Moss Point.He is able to see his family regularly and talk to them. Earlier this week his four year old grandson had stopped by to say hello, he said. Other friends come by and say hello throughout the week and his partner from work will come nearly every day.

TV and sitting out in the sun are two ways he lets the time pass. Brookhaven is a nice place to live if you like the town but he misses the countryside.

“I like the country better. I like being able to hear roosters crowing and dogs yapping. You don’t hear any roosters crowing here,” Moore said. “I would like to hear something other than sirens. Most days I just come out here and sit in the sun. We all find something to do. Cowboy, he totes cans all day.”

The man he knew as cowboy walks across US 51 to the BKwik in front of Sears. Wearing a black felt cowboy hat, blue jeans and a button shirt, he sips his coffee inside before making the trek back across the highway and down 550. Moore said he sees him most days collecting bags of cans.

“Everyone is looking for something to do,” he said. Moore happens to prefer watching TV and sitting in the sun. After high school, he went to Co-Lin Community College and took a house building class. For 30 years he worked in carpentry until health challenges kept him from working. Carpentry was a better alternative to mechanic work as he did not enjoy having greasy hands.

“We would help people build or repair. There is always work out there as a carpenter. A building doesn’t last forever,” he said. “I enjoyed the framing. Roofing, I didn’t care for. We would go in to work and sometimes I would work through the night and not get home until about 2 or 3 a.m. When I retired I gave all my tools away. I let the young people take it over. If I could do more I would.”

He extended his hand for a farewell shake and drove off to his apartment to watch Gunsmoke, following a worn out trail.