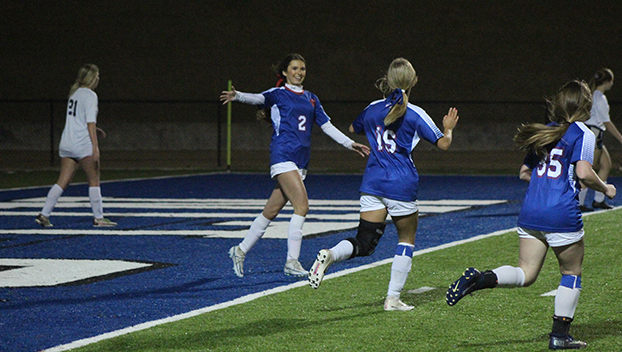 Wesson's No.2 Lily Channell celebrates with her sister No. 16 Marley Channell following a goal in the second half. Lily scored on a cross from her older sister Marley. (Hunter Cloud | The Daily Leader)

WESSON — Bogue Chitto and Wesson met in a girls district soccer match and produced a thrilling 4-4 match in 80 minutes of action Monday night. Coaches agreed before the start of the game to go straight to penalties if they were in a deadlock at the end of regular time.

Wesson converted two penalties to win the game 5-4 (2-0 on penalties). Marley Channell scored the equalizing goal for Wesson late in the game to send it to penalties.

“It felt good to win on penalties. The last game we came close but we pulled through tonight,” Channell said. “We practiced a few times over the break. We are continuing to practice and hope to finish out the year strong. I have been out pretty much the whole season and this is my third game back. To score the tying goal, it let me know I was back.”

Head Coach Amanda Bergeron told her team they played their best game against Bogue Chitto in her post match speech. Channell played a role in the win with her goal and an assist to her sister Lily Channell.

Wesson ramped up their offensive pressure in the last 10 minutes of regulation. Marley said it was “nerve wracking,” as they pushed for a goal and fought to keep the ball in Bogue Chitto’s half of the field.

Wesson trailed Bogue Chitto 2-0 early in the game after Kyndra Quinn and Autumn Ramshur opened the scoring for the Bobcats. Lily scored the first goal for Wesson and Hailey Walker equalized with a curling shot into the top left corner of the goal slipping past the keeper’s outstretched glove going into halftime.

Lily put the Cobras in front early in the second half on a cross from her sister Marley. The sisters have played soccer together for the past four years. Marley is a senior and her sister is a sophomore.

“I was trying to get the ball across goal and ended up setting up my sister for a goal,” Marley said. “Sometimes it can be tough playing together but we mainly work together and try to be aware. We try to help each other out. I’m hoping this team can have a chance at the playoffs if we keep winning.”

Quinn and Ramshur scored a goal in the second half. Ramshur said the penalty shootout was a nerve wracking experience as players stepped up to the penalty shoot with the weight of the team and the game’s outcome on their shoulders.

Despite the loss in penalties, Ramshur said she was proud of the way the Bobcats played. They never gave up and responded well to adversity throughout the match.

“It is disappointing to lose but there was always hope we could come back up,” Ramshur said. “We try our hardest and give it our all because we know one day we won’t get to play on this field anymore. I think the next time we get in a close game we shouldn’t go to penalties. We will be better about getting back on defense and avoiding penalties.”

Quinn and Ramshur terrorized Wesson’s back line with creative runs and finishing crosses in the box. They have a good attacking partnership because of their friendship and the years they have played tennis together, Ramshur said. Quinn agreed and said the team has also grown better together.

“Because of our friendship, our team work is great. We are good at communicating together. We are on the same page and we know what to do,” Quinn said. “It is hard to explain how we have grown this year. Everyone has improved as a team and as individuals. We work hard and play well together.”