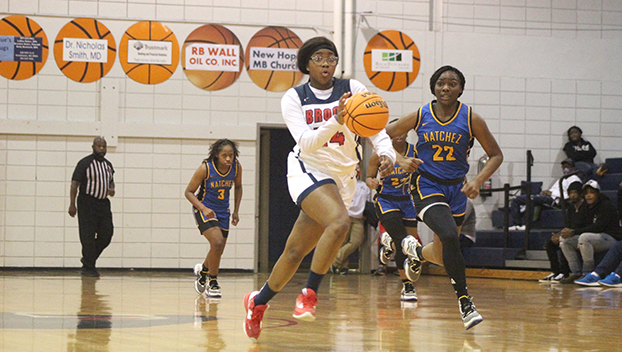 Makiya Stallings said her goal in her senior season is to make the most of their games. Their time is running out and she wants to win a state championship. (Hunter Cloud | The Daily Leader)

BROOKHAVEN —  Defense led the way for Brookhaven in a 52-27 district girls basketball win over Natchez Tuesday night. Ole Brook held the Bulldogs to five points in the first half and shut out the visitors in the opening quarter to jump out to a 27-5 lead at half.

Angel Wilkinson led the Panthers in scoring with 19 points and three three pointers. Alexis Kelly had nine points and Makiya Stallings had eight points. Stallings started beside her fellow senior teammate Leah Wilcher guarding the hoop and paint. Together, they made offense difficult for Natchez.

“We just came out there and shut them down and got our momentum up. We were playing well as a team in the first half. I can’t explain it, we just played good,” Stallings said. “On offense, we wanted to work the ball inside and our perimeter shooters shot well. We got the ball inside on offense, got offensive boards and worked the gaps.”

After halftime, Natchez came out and scored 11 points in each of the next two quarters. It was not enough to overcome a slow start but they kept working to score points. Olivia Davis led the Bulldogs with eight points. Cylenthia Reed and Jaliyah Wright had five points for the Bulldogs.

Looking to the second half of the season, Brookhaven is 1-1 in district play with two games against Florence, one game against Natchez and West Jones left. Stallings said the team’s goal is to win a state championship. Her father is usually on the baseline cheering her on and coaching her.

“You want to be the champion and play every game like it is your last game,” Stallings said. “This is (the seniors) last year so we will make the best of it. My dad is really who pushes me to be the best I can be. I wouldn’t be who I am without my dad. I plan to go to the University of Southern in the fall. Ever since I was a kid I have loved the campus and I just like the environment. They have kept in touch with me pretty well. I plan to study social work so I can help kids get out of bad homes and help them find good ones. It has always been my dream to help kids.”