Bobcats send seniors out on top 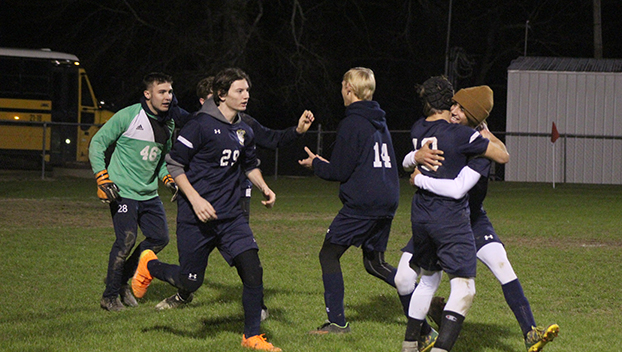 BOGUE CHITTO  — Wind, mud, yellow cards and Hazlehurst’s offensive pressure could not crack the Bogue Chitto team in a 1-0 win Thursday night. At the final whistle, seniors Landon Davis, Colton Frith and Deacon Wallace jumped, hugged and spun around with glee, they had won on senior night.

In the boys game, three Bobcat players were shown yellow cards and one Hazlehurst player saw yellow in the tense match. Defensively, the Bobcats stood strong by playing organized ball and senior goalkeeper Deacon Wallace made 10 saves to keep the clean sheet.

“It is unbelievable to get the win. I knew we had it in us,” Davis said. “We had some minor things come up that we have had to fix in practice. I think we got past it tonight.”

Bogue Chitto hung on to a 1-0 lead for close to 30 minutes in the second half. Gatlin Guynes chipped a pass into the attacking third and Andrew Merrell fired in the go ahead goal into the bottom left corner to put them in front. It was an important goal as it lifted pressure off of the defensive back line.

Frith said they lost to Hazlehurst 2-0 earlier in the season and have worked hard to bounce back. It was a big win for the Bobcats as Hazlehurst was the No.2 seed in their region behind Franklin County.

Wind made the first half a challenge for Bogue Chitto, Firth said. Hazlehurst used the tailwind to their advantage to float balls into dangerous areas and force the Bobcats to take risky goal kicks. Gusts of wind would push a ball from the middle of the field and carry it out to the sidelines.

“It was killing us. We couldn’t get the ball up field,” Frith said.

They worked hard to get out of the half without giving up a goal and nearly lost the shutout. Hazlehurst was awarded an indirect free kick inside the penalty box after Bogue Chitto was called for time wasting on a goal kick.

A wall of blue filled the goal as they waited for Hazlehurst to fire a shot. A Hazlehurst player rolled the ball to his teammate who fired a shot but it hit the crossbar and bounced to the edge of the box. Hazlehurst fired a shot on goal but it hit the post and went behind for a goal kick. Pressure did not crack the Bobcats defense for 80 minutes.

“I thought for sure they were going to score. I think we got lucky,” Davis said. “The pressure builds throughout the game. We were fighting to get back and have to keep playing. You have to put your heart out on the field because that score could be win or lose.”

Wallace made key saves and could be heard yelling every time his defense tried to pass the ball back across the middle of the field. His dad Justin Wallace was the only person to score on the night as he fired a penalty shot past him after the game.

“He was a dog in goal tonight. I have to give him props, I was proud of him,” Frith said. “Deacon tells us where to go when he is in goal.”

Bogue Chitto has made strides from where they were at the start of the season. Davis said they went from barely completing five yard passes in their practices in October to winning games. A fourth year senior, he said he will miss the school and small town where everyone knows everyone and “their grandma.”

Frith said the team can continue to get better by improving their fitness.

“If we kept getting better physically, we would be the best team in the district,” Frith said. “It has been drastic how much we have improved. This was my second year, I will miss my teammates. Huge props to my teammates for the win tonight.”

Bogue Chitto’s girls soccer team had fun on offense in the final 20 minutes. Senior Anna Claire Waller, who has been a defender on the team for four years, moved up the pitch into a striker role to close out the game.

Teammates worked to pass the ball to her feet. Sometimes a Hazlehurst defender would block a shot, or a pass would barely miss her foot. One cross fell right to her feet and she fired a volley into the ground, hit the post and barely missed the goal.

“I freaked out. I’m not on offense often. I’m not good at shooting at the goal,” Waller said. “ It was both nerve wracking and exciting though.”

Her senior teammate Haleigh Porter scored a goal earlier in the year and played a strong defensive game Thursday night. Waller said she will miss her teammates like Porter.

Soccer was a sport she started playing because her brother signed her up for it after she signed him up for football. She has stuck with the game because it was fun.

“My favorite memory was scoring a goal for the other team two years ago,” she said, laughing. “I don’t know what I will do after high school. Maybe go to Southwest. My teammates can keep growing from practice. Our play has changed tremendously. We are winning some because we practiced hard over the summer. We practiced every day besides the weekend and coach Sarah has been a big impact.”

Bogue Chitto plays at Franklin County next Tuesday and against West Lincoln next Thursday.