Back in time: 1949 Water Carnival to be re-‘broadcast’ 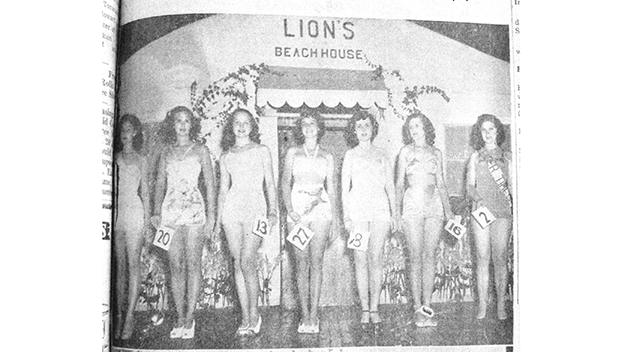 “You are about to enter another dimension. A dimension not only of sight and sound, but of mind. A journey into a wondrous land of imagination. Next stop —The Twilight Zone.” — Rod Sterling

Come hear the 1949 broadcast by WJMB radio of the 7th Annual Lions Club Water Carnival from the municipal pool. The carnival includes three age groups of young ladies, 8 and under, 9 through 14, and 15 and up. There are fireworks, operetta songs, swimming, diving, clown shows, and much more. There are a few segments recorded, not the entire pageant.

The Lincoln County Historical and Genealogical Society will present a visual introduction to the water carnival followed by a radio broadcast via a vintage radio, much like one listened to on that July night in 1949. The original audio was recorded is on a large studio-style vinyl record. The program will be at 6 p.m. at the Jimmy Furlow Senior Citizen Center.

Here is a partial list of the contestants. If you recognize a name, let them or their family know. Please excuse any misspelling as these were taken from the audio broadcast.

The public is invited to attend the program. LCHS membership is $25 per year, or a lifetime membership for $200. Members will receive a listeners guide to follow along with the broadcast. Plan on attending Jan 26 at 6:30 p.m. at Jimmy Furlow Senior Center, 201 S First St, Brookhaven.