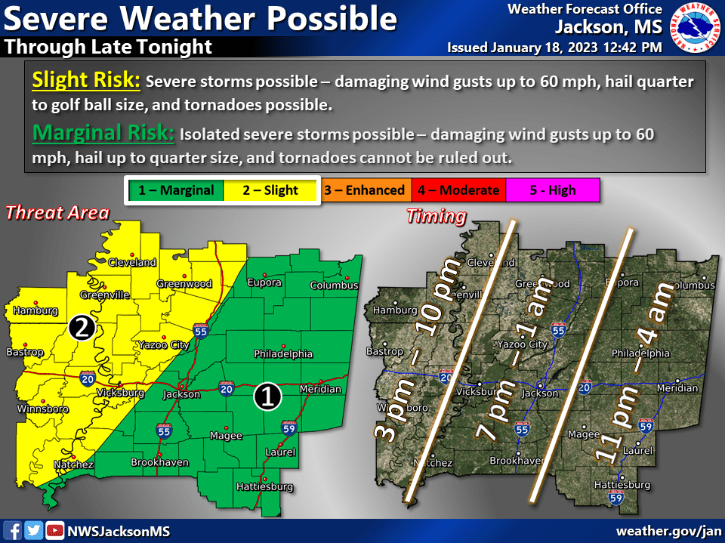 The National Weather Service in Jackson has warned of a marginal risk of severe weather for Lincoln County and most of the surrounding area. Isolated severe storms are possible, with damaging wind gusts, small hail and a tornado cannot be ruled out.

Sustained winds of 15 to 20 mph are also a concern with gusts as high as 35 mph. Weak trees and limbs could fall in high winds and high profile vehicles could become unsteady.

Showers are expected across the day, mainly after noon, with a 30 percent chance of thunderstorms after 3 p.m. Some storms could produce heavy rain. South winds of 5 to 15 mph could also produce gusts as high as 30 mph. High will be near 76.

From about 7 p.m. until 1 a.m. Thursday, chances of showers and thunderstorms increase to 90 percent. Some could produce heavy rain, with rainfall amounts between one-half and three-quarters of an inch.

South winds of 5-10 mph could also produce 30 mph wind gusts. The low will be around 52 degrees.

Weather to the northwest of the area may be more severe, with wind gusts up to 60 mph, small hail and a few tornadoes.