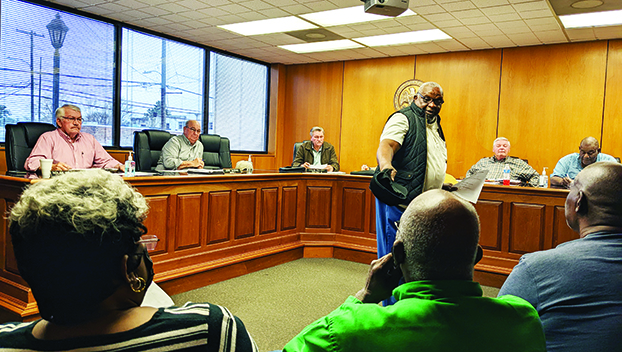 Pastor James Pittman, standing, motions to Ida Butler and Johnny Washington, at left, while introducing church members to the Lincoln County Board of Directors Jan. 17. (Angela Cutrer | The Daily Leader)

A group of extremely polite citizens who live on or use a local road consistently visited with the Lincoln County Board of Supervisors Tuesday. They asked for some help in making Springfield Trail filled with fewer obstacles.

Johnny Washington, a citizen who attends Springfield Missionary Baptist Church, started off the discussion by introducing the church’s pastor, the Rev. James Pittman. Both men were quick to say first and foremost that they appreciated the board speaking with them.

“We thank you for allowing us to come before you,” they both said before describing the road’s hills, holes and even height issues.

Pittman introduced Ida Butler, who described how on the second Sunday in December, she was headed to the church for Sunday School when she topped one of the two hills on the road and was almost hit by a vehicle. “It’s so narrow, and I’m wondering if you could do something about the height of the road, too – we don’t know who’s coming or going and if I hadn’t swerved [out of the way], I think I would have been killed,” she said with emotion. “It was but for the Grace of God I wasn’t.”

District 3’s Nolan Williamson agreed immediately with there being a multitude of problems, but got everyone laughing when he answered with, “We were still waiting on the money, money, money!”

Williamson seemed extremely concerned about the issues and noted how annoyed all the supervisors were that the county has had to wait so long for the American Rescue Plan Act funds to be placed in the county’s coffers. District 4’s Eddie Brown agreed, as did all the supervisors, saying that it was before January of last year that they started planning the road work they intend to do in the county and yet, they have had to wait and wait, and then wait some more.

Supervisors made it clear they take all road issues seriously. “It’s just a little, narrow road and it shows how roads can outgrow an area,” Williamson said to fellow supervisors. “There are a lot of people living on and using that road now. And I truly believe that agriculture is dependent on county roads, yet they are the first to get ignored.”

He said that he has eyes on helping with that road. The jovial, yet still serious, mood continued as Hackett piped up with, “Well, maybe you could start right there [on our road] first?”

All the supervisors smiled at that comment, since every road is important to someone in the county and supervisors hoped to be able to handle all the road concerns brought to their attention.

In other business, the commissions approved the following:

The next regularly schedule meeting for the Lincoln County Board of Supervisors is planned for Feb. 6 at 9 a.m.