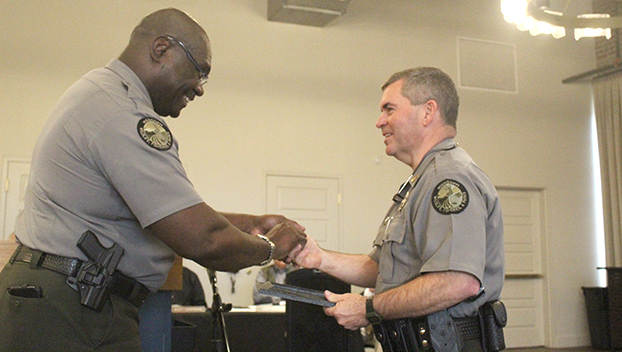 Left, Col. Jerry Carter, chief of law enforcement, awards a certificate to Ricky Flynt recognizing his 29 years and seven months of service with the Mississippi Department of Wildlife, Fisheries and Parks. Flynt has led the Alligator Program since 2003 and will take on a Project Manager Role with the Mississippi Outdoor Stewardship Trust Fund in February. (Hunter Cloud | The Daily Leader)

CLEVELAND — Alligator Program Coordinator Ricky Flynt presented his last Alligator Program Report to the Mississippi Department of Wildlife, Fisheries and Parks Commission Wednesday morning. Flynt said he is leaving after 29 years and seven months of service with the MDWFP. He will transition into a Project Manager role with the Mississippi Outdoor Stewardship Trust Fund on February 1, 2023.

“Thank you for a career I could not have imagined. I was a young kid growing up watching ‘Wild Kingdom,’” Flynt said. “I was envious and hoped one day I would get to do that. It has come true, and I have been afforded those opportunities.”

The Clinton native began his career with the MDWFP as an area manager overseeing Mahannah Wildlife Management Area starting in 1993. He moved to manage Black Prairie WMA and other WMAs before taking over Mississippi’s alligator program in 2003.

Mississippi had a two-year vacancy in the position at the time. His experience working in the Delta, up near Columbus in the prairies of Mississippi, and now with alligators have prepared him for the next chapter in his career.

“I have experience with different habitats, and we will manage a statewide program. It is an opportunity to supervise the projects,” Flynt said. “We have 13 project applications so far and expect more. We will meet more to learn about how to prioritize them.”

Commissioner Chairman Bill Cossar thanked him for his service and said, “we will miss you. You took it from scraps to what it is now. Good luck to you.” Commissioners William “Billy” Mounger II and Scott Coopwood echoed Cossar and told Flynt he had done a fantastic job.

Flynt said applications for the hunt totaled 7,050, an increase of 947 from 2021. Hunters harvested 830 alligators, up 54 from 2021. The average length of alligators harvested was 7.85 feet long. He said 4.4 people made up each hunting party on average during the season.

MDWFP issued 980 permits, and 728 of those permit holders harvested an alligator, up 59 from 2021. Hunters caught and kept or released 1,669 gators during the season.

The longest female alligator, one the program tagged on June 11, 2009, whose name was Yellow .410, was harvested this year. The alligator was 10 feet-two inches long and had not grown since 2009.

“We know alligators can experience exponential growth to where they do not grow,” Flynt said. “We tried to find out how old she was. You can take a microscopic cross-section of the femur bone, and it is supposed to be like a tree. Each year you have a ring of growth. Her bones were sent to a lab in Montana with 500 other gators this year to have them analyzed. They were not what we had hoped. We found out rings can be absorbed and only a minimum age could be shown. My estimate is that she was 75 years old, but the report said she was no younger than 18 years old.”

Yellow .410 ties a world record for the longest free-ranging female alligator caught in the wild. The other gator was caught in Florida in 1989. Flynt said they had 11 tagged alligators harvested by hunters this year.

Colonel Jerry Carter presented Flynt with a plaque to recognize his service to the department. Before the presentation, Flynt addressed the commission one last time as the program coordinator and left some words of advice.

“There will always be a request to increase the number of tags. What is in place works fine. It is not a hunting season to provide population production,” Flynt said. “It has taken a while to develop. We have worked on it for 19 years. It is a complex machine, and I feel it is better to maintain the status quo to ensure a smooth transition. All recommendations I gave came as a biologist with a skeptical approach. We are here for the resource first and the hunting public second.”

Flynt said whoever takes over for him will have to read a lot and spend a lot of time in the field working with alligators. He said he initially took the job to be closer to home in Clinton but has since learned so much about alligators.

“They are the most amazing wildlife species we have here hands down,” Flynt said.