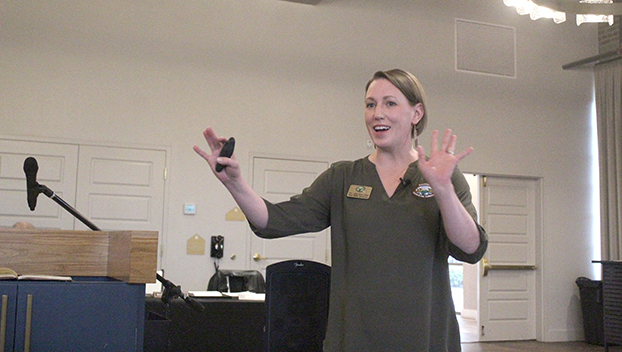 Jennifer Ballard is the State Veterinarian for the Arkansas Game and Fish Commission. She presented an in depth look at CWD including how it spreads, why it is a concern and how agencies can fight the disease. (Hunter Cloud | The Daily Leader)

CLEVELAND — Jennifer Ballard, State Veterinarian for the Arkansas Game and Fish Commission, presented a detailed report on CWD at the MDWFP monthly Commission meeting Wednesday morning. Arkansas has fought the disease for the past six years while Mississippi has fought it for the past five years.

Ballard presented a detailed overview of the disease. Chronic Wasting Disease is an infectious neurological disease caused by a prion, a misfolded protein. It is 100 percent fatal and has no cure, no vaccine nor a live test for the disease.

Wildlife has been exposed to diseases for a while but not every disease acts the same and wildlife agencies are more concerned with others. She explained there are a few criteria that make pathogens high risk and cause great concern for wildlife agencies. Multiple hot spots, environmental reservoirs of the disease, the disease being frequency dependent and impairing reproduction make a pathogen high risk. CWD meets all of the criteria which is a challenge for management.

“It makes it very difficult. CWD runs a course and you may not like how it comes out,” Ballard said. “When we manage the disease, if you look at the diseases they typically have three characteristics. Most cause long-term population problems pose a human health risk and domestic animal health risk. Heavily infected cervid populations will not thrive in the long term. We know limiting human exposure is prudent. CWD is a disease worth managing.”

Prions are originally a protein in the body that performs a function. Prion diseases occur when the protein takes on a new shape. It is highly resistant to break down and the immune system does not recognize something is wrong, Ballard said.

The misfolded protein kills neurons which leads to the clinical stages of the disease and fatality. CWD is a form of transmissible spongiform encephalopathies disease. The most commonly known TSE is Mad Cow Disease. Deer go through a 16-month incubation period when they are infected with CWD. Prions shed into the environment and infect other deer through urine, feces and saliva.

Ballard said there are no live tests because the best way to test for the disease is to get to lymph nodes close to the brain stem which is difficult with a live animal. Current research is looking at genetics and if any genetic codes could help cervids become resistant. Ballard said the fear is if they push research too far they could facilitate new prion strains of CWD.

Colorado Parks and Wildlife recently released a video series titled “Seeing is Believing,” on their YouTube channel. The department is referring more to the effects of CWD on the population than the actual prevalence of the disease in individual deer with the series.

“It is rare to see an animal in the clinical stages. We may not see sick animals and it might be misleading to the public. It never stops though and it is not seasonal like EHD. You might not catch it during hunting season,” Ballard said. “With uneven distribution, it is difficult to detect the disease at a low prevalence. In Arkansas, we focus on high-risk groups. Known maternal groups with positives and mature bucks.”

Bucks are the most likely to be exposed to CWD because of their natural movement patterns and social behaviors. Maternal groups which have a positive doe are at a high risk of contracting the disease.

Another challenge with CWD is the disease can last in the environment for many years. Scrapie, a TSE in sheep, lasted in the soil for 17 years. Ballard said it could depend on the ecosystem and soil types how long CWD remains in the environment.

This is the time to manage and when you can make a difference. Oftentimes, the first detection is not the first case of CWD,” Ballard said. She added it has been documented that positive does can transmit the disease to fawns before they are born which is why Arkansas has stopped rehabilitation of fawns.

Deer typically have a 70 to 80 percent chance of survival each year but with CWD infection it is cut down to 40 to 50 percent survival. She displayed a graph that showed white-tail, mule deer and elk herds who had faced positives. All populations shrunk with the increased prevalence of the disease.

Arkansas is trying to manage by limiting dispersal by taking younger bucks. They have lowered their antler restrictions and in CWD management zones, button bucks count as doe tags. Ballard said it was a choice they never thought they would have to make, choosing herd health over antler size.

Another management tactic is to limit the exchange from family groups. This is done by limiting artificial baiting and feeding because studies have shown they break down the social structures and bring different family groups into one area, Ballard said.

Best Management Practices published by the Association of Wildlife and Fisheries Agencies in 2018 call for limiting the artificial congregation of deer. Mississippi has banned supplemental feeding in CWD management areas and so has Louisiana. By lowering prevalence and congregation, the risk is thus lowered.

Ballard said there is nothing scientists can do to decontaminate the environment. CWD infects the soil and can be found in the plant matter but if managed early the accumulation of shed prions is slowed. Mississippi has a chance in Claiborne County to do just that. Seven cases of CWD have been detected in Tensas Parish with five positives found 1.5 miles from the Claiborne County line.

MDWFP’s Commission had previously lifted the ban in November 2022 after Leonard Bentz made a motion. Bentz was not present at the meeting but was there via a phone call due to having COVID, Cossar said. Penny was present for the entire meeting Wednesday and was at the previous meeting in December where he requested them to consider reinstating a feed ban.

“I wish everyone could be here today. You spent an hour learning about CWD today from an intelligent expert from Arkansas. You can do things to stop the spread. We can continue to prohibit the movement of deer and carcasses and reinstate this feed ban,” Penny said. “What will you do to stop the spread of the disease in the deer? You know what is important. What will be your legacy? I have encouraged people to test deer there. We sent deer my kids have killed this year to be tested. All we can do is a test. We can be proactive. You made a reactionary decision. I felt it was illegal and irresponsible. I encourage you to do what is best for our deer.”

No action was taken by the commission.

State wildlife agencies can fight it by having a written out plan, being transparent, following science and remembering the fight is a marathon and not a sprint.